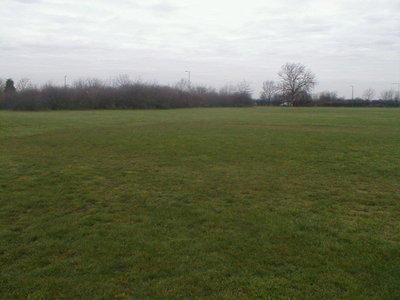 At 27 acres, Brittons Playing Field is a site that is large enough for formal and informal recreational activities.

With a play area, trim trail and skate park, this site is equipped with a wide range of facilities for varying age groups.

During the winter months, the majority of this site is marked for local football clubs.

Brittons Playing Field is an open, unfenced site with a variety of facilities that cater to various age groups.

Brittons is probably the most suitable site in the borough for organised sport given its excellent drainage and its large level expanse, similar to the site opposite, Bretons Outdoor Recreation Centre.

The site was formally used for food production during the war but it was gradually released for the development of playing fields by the War Agricultural Committee.

Brittons Playing Field is served by two small car parks - one on Rainham Road and another on Ford Lane.

The park is generally open from 8am to 8pm, but closing times will vary seasonably - generally half an hour after dusk. Exceptions may occur. Contact the park on 01708 748646 for more specific daily times.

This large open area was rented to a farmer for food production during the war and was gradually released for the development of playing fields by the War Agricultural Committee.

Seven acres were first reinstated and this area was marked for two football pitches and one cricket square.

Old farm buildings that used to stand on the site were demolished. Construction of a pavilion was started in 1957/58.

Around this time, the remaining acres of ground were released from food production and reinstated as grassland. Between 1962 and 1965, a paddling pool, second pavilion, Ford Lane car park and two hard tennis courts were created.

Of these features, only the car park survives today.

In 1960, the Committee agreed to move the playground to an area situated away from the housing development.