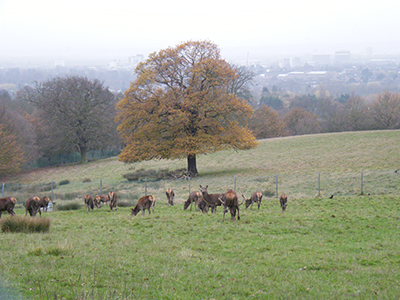 Once a privately owned estate, it is one of Havering's largest parks and has achieved Green Flag status since 2007.

It is also a designated Local Nature Reserve, home to a herd of captive red deer, which are a popular attraction. With its gently rolling landscape, Bedfords Park offers a variety of different environments, from small blocks of scrub to large areas of woodland.

The site of the old mansion house and cafeteria was developed in 2003 as an Essex Wildlife Trust Visitor Centre, with panoramic views over East London.

The trust hosts a variety of events and educational activities for schools and families.

Gold award for 'Country Park of the Year', London in Bloom 2019

Bedfords Park is one of Havering's largest parks and has achieved Green Flag status since 2007.

Once a privately owned estate, it is a designated Local Nature Reserve, and is home to a herd of captive red deer which are a popular attraction. The extensive grounds of meadow and mature woodland provide a variety of walks and the opportunity to bird watch.

Worth visiting is the impressive visitor's centre which is run by the Essex Wildlife Trust, where you can relax and buy light refreshments. Bedfords Park is situated to the east of the B175 minor road between Collier Row and Harold Hill, approximately 3.5 kilometres north of Romford town. The park provides an important vantage point for to enjoy panoramic views across much of East London.

In 2013 the Council were awarded  funds for a 10 year period from Natural England to manage large areas of the park through grazing cattle in a scheme known as Higher Level Stewardship.

During the autumn and winter of 2013/14 fencing and gates were installed at the park and in the spring of 2014 a historic breed of cattle (Red Poll) were first used to graze the park to maintain the grasslands.

Grasslands range from sports pitches and species-rich swards, to hay meadows and tall herb marshlands. Whilst most, if not all of the older woodland is derived from plantations, several species indicative of ancient woodland conditions occur here, mainly associated with the streamside woodland on the western boundary of the park.

Open water features comprise one large, artificial fishing lake in the south of the park and one other significant pond in the northern section. Other, smaller ponds occur in Nursery Wood and in the secondary woodland to the east of the small fishing lake close to Lower Bedfords Road.

There is a free car park at the Broxhill Road entrance. There is also bicycle parking available.

There is no direct bus route to Bedfords Park, however there are nearby bus stops along the 375, 575 and 499 bus routes.

The park is generally open from 8am to 8pm, but closing times will vary seasonably - generally half an hour after dusk. Exceptions may occur.

The walled garden is open on Tuesdays and Thursdays between 10am and 4pm.

Please note that this is seasonably variable, closing earlier in winter.

The volunteers also occasionally open Sundays for a work party. This is advertised on the Friends of Bedfords Park Facebook page.

The name Bedfords is thought to derive from a John Bedford or Bedforde who owned land in the area in 1362.

The Cooke family, who purchased Gidea Hall in 1452, added Earles to the estate. Bedfords was part of Gidea Hall until its sale as a separate estate in 1659 to Joachim Matthews of nearby Gobions.

Sir Philip Matthews, son of Joachim, sold the estate of Bedfords and Earles in 1688 to Simon Rogers and his wife Sarah.

A succession of London Merchants owned Bedfords from that point on and none are thought to have lived at Bedfords. In 1771 Nataniel Houlton sold Bedfords to John Heaton.

John Heaton, like many of his forbears, was a lawyer, admitted as a Fellow of the Society of Lincoln's Inn in 1756.

When his uncle, Thomas Heaton, died in 1764, John Heaton succeeded both to his chambers at 20, Old Buildings, Lincoln's Inn and as the legal advisor and auditor to the 4th Duke of Devonshire and then the 5th and 6th Duke.

By the end of the eighteenth century, Heaton was a very wealthy man, shrewd with finances and paid £1000 a year plus his expenses by the Devonshire’s. When he retired after the 6th Duke took the title, he was given £2,000 as reward for a lifetime’s service.

The purchase of Bedfords cemented his social status among the landed gentry. Heaton had inherited various properties and farms from his uncle Thomas and his father in Teesdale, and also owned estates in the Midlands near Ashbourne and Marston Montgomery as well as another at Limpsfield in Surrey.

Bedfords was his main residence and pride and joy. All the knowledge he had acquired acting for others equipped him for the development and management of this 350 acre estate.

One of Heaton’s agents, John Gould, kept a detailed diary from 1783 to 1788. He described Bedfords as having “much the appearance of a park and all the uses of a farm.”

The house had a two-acre garden enclosed in 12 foot high brick walls nearby, and the estate of 350 acres was extensively planted with clumps of trees irregularly spaced in the best manner. The house was sheltered to the north and east by plantations of oak, chestnut and various evergreen firs, laid out with gravel walks winding through them.

One of Heaton’s first tasks was the rebuilding of the house, almost certainly shortly after he purchased the estate, as a two storey brick mansion with a cement render – the 1819 view of the house shows the Heaton building.

He built the brick farmhouse of Upper Bedfords at Earls immediately east of the walled garden as the home farm of the Bedford estate and the successor of an earlier farm on the same site, and established Heaton Grange farm, a model farm applying the new developments in farming and its large scale ideas.

John Heaton was married twice, in 1764 to Mary, eldest daughter of William Bridges of Barnes, then again in 1803 to Mary Carr, the daughter of the Rev Carr of Bolton Abbey, Skipton. He was a significant benefactor and supporter of the church in Havering and took a role in village life as the owners and tenants after him did.

He died on 3rd September 1818 at Bedfords and his funeral took place in Havering on September 10th. There is a memorial to him in the church.

The walled garden is not present on Chapman Andre map of Essex 1777, but was presumably erected by John Heaton as it appears on the 1” map of 1792 held at the Essex Record Office, but without the pineapple house or fernery present.

Heaton’s two acre garden was enclosed in 12 ft high brick walls, the main axis runs west/east from the cart entrance opposite the mansion to a pedestrian gate (later bricked in) on the Upper Bedfords farm side.

On the death of John Heaton, the bulk of his estate was left to his grandson, Charles Heaton Ellis, who had let the property as early as 1818 to Joseph Quincey (up to 1829), then John Rogers, who contributed to the enlargement of the churchyard at Havering in 1833 and helped fund the school in 1837.

With Mr Robinson of the Bower House, he gave the dinner for the passing of the Great Reform Bill in 1832.

By 1846 Charles Ellis Heaton was in possession of an estate totalling 537 acres. In 1851 he repaired the buildings at Upper Bedfords and built several new farm buildings. Further tenants lived at Bedfords.

In 1853 the estate was divided and sold by public auction and Bedfords and Earls were purchased together by a Mr J.W. Hawksley who lived in the mansion and let the farm.

Writing about the Lost Gardens of Heligan in Cornwall, one author writes of the Pineapple Pit there “What a find, a giant frame given over entirely to the production of fresh pineapples; it was in itself a giant monument to what was increasingly appearing to be a state of the art Victorian kitchen garden”.

Clearly the ambitions of Mr Hawksley for the Bedfords estate were in keeping with the times.

Bedfords and Earls was sold again in 1865 to a Mr Charles Barber and the mansion was enlarged in 1865-7. In 1870 the estate was sold to Henry Stone who was the last Lord of the Manor; the farmhouse was extended at this time.

At some point during this period the mansion house was occupied by James Theobald (d.1894), MP for Romford, and in 1905 by Sir Montagu Cornish Turner. Stone’s widow, Mrs E.V. Surtees, remarried and sold Bedfords to Romford Urban District Council for £9,000 in on 31st March 1933 .

Bedfords Park was opened in 1934 with the mansion house used as a museum and art gallery.

During the Second World War the house was occupied by military forces and the AFS as a base for the Home Defence. However, following serious deterioration of the fabric of the building and after being damaged by vandals, the mansion house was demolished in 1958 and replaced by a modern cafeteria in 1964, now itself replaced by the Essex Wildlife Trust Visitor Centre which opened in 2003. Only the tall red-bricked walls of the walled garden survive.

In 2003 the Visitors Centre was opened in partnership with the Essex Wildlife Trust.  The Friends of Bedfords Park formed in 2004”

Food and refreshments are available at the Essex Wildlife Trust Visitor Centre. There is also a picnic area.

There are various walking routes around the reserve, call into the visitor centre for more details.

There is a natural playground and maze on site.

There are toilets on site, including disabled-friendly toilets and baby changing facilities, in the Visitor's Centre.

There is a Friends of Bedfords Park group which provides a volunteering opportunity to those wishing to get involved with Bedfords Park, which meets on the second Sunday of the month at 10am.

Dogs on leads are permitted in the seating area of the visitor centre and on the reserve. Dogs are not permitted at events. 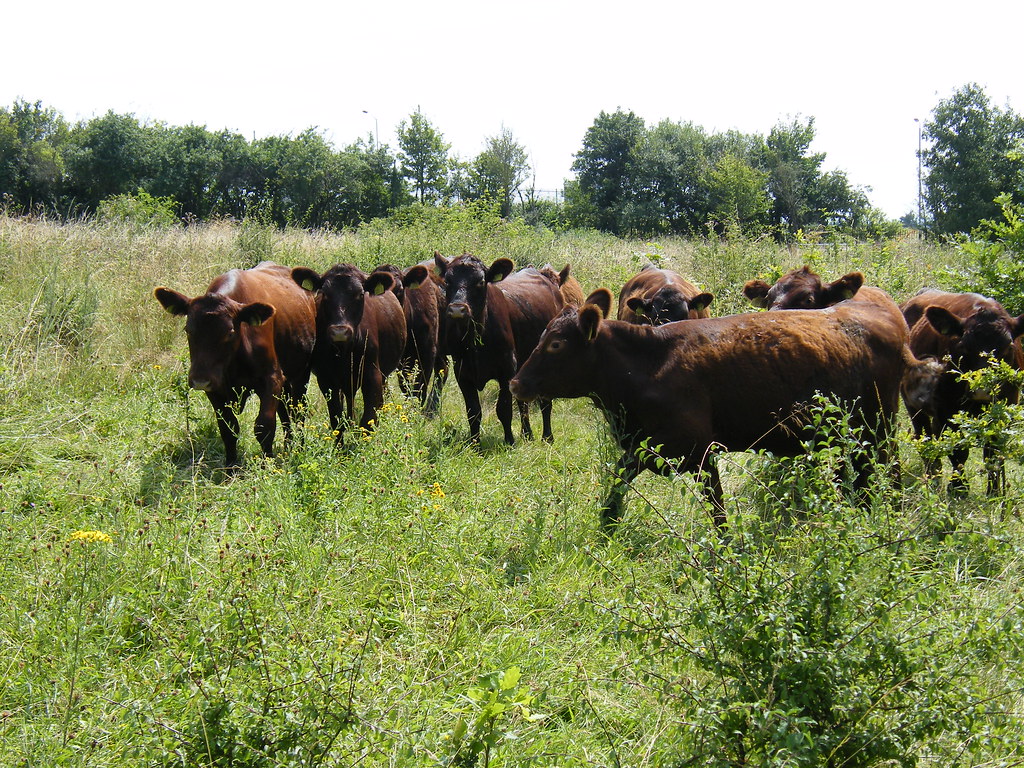