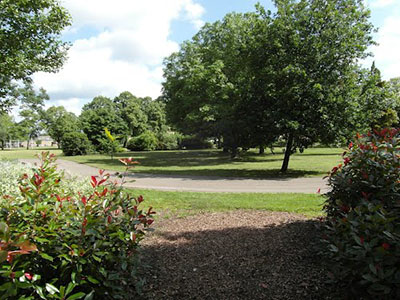 Cottons Park, formally known as Cottons Recreation Ground is the closest park to the Romford Town Centre and is now on the edge of the ring road.

Despite it being located in a densely populated part of the borough, Cottons Park with its small wildflower meadow and conservation grassland is alive with activity.

Cottons Park was formally known as Cottons Recreation Ground. During the last war the whole area was used for war-time purposes, eg allotments, air raid shelters and a large building constructed as a decontamination centre, which was later turned into a pavilion and cafe.

Cottons Park is the park closest to the centre of Romford and is now on the edge of the ring road.

The park covers an area of 6.43 hectares and is laid out for formal sports, including rugby and football. It also includes a children’s play area, wheeled sports equipment, a multiuse games area, outdoor gym, ornamental shrub beds and grass areas for informal recreation.

There are five entrances. two along London Road, one at Recreation Avenue, one on Marks Road and one through the car park at Cottons Approach. These all feed into the surfaced footpath network in the park.

There is a paid car park at Cottons Approach. Operating hours are Monday - Saturday 08:00-18:30 with a maximum stay of 5 hours.

If you wish to travel by bus, you can reach Cottons Park using route 86 which runs between Romford and Stratford. There is a stop on London Road just outside the park gates. Alternatively, it is also possible to take the 252 from Collier Row and alight at Romford Market. From here it is just a short walk to the entrance in Marks Road. ​Detailed public transport travel information and journey planner can be found on the Transport for London website​.​​

What is now known as Cottons Park was originally known as Cottons Recreational Ground and was once owned by the Cottons family as part of the famous Cottons Estate. It is believed that Cottons House stood where the Ford Garage now stands at the top of Waterloo Road by the Brewery Roundabout. (Waterloo Road was known as ‘Dog Lane’ that lead down to the old Romford Station).

Cottons House was owned by Nicholas Cotton who occupied a prominent position in Romford Town at the time. He died 2 years after Queen Elizabeth’s visit in 1568. He may have met her.

The family continued to live in the house for many years until they fell on hard times, reducing their once fine grounds of paddocks, orchards and house to an overgrown wilderness and ruin. The Council then sought ways of removing this eyesore that was so close to the town.

The 15 acres of Cottons Recreational Ground were purchased by the Council in 1920 for the princely sum of £4,500. After a year of heavy negotiations with the Cottons family solicitors and several grant applications to leading banks and approval from the ‘Ministry of Health’, the Cottons Family still refused to sell the land.

The Council must have automatically purchased it under a Compulsory Purchase Order. After its purchase the Council wasted no time in clearing the grounds and erecting six tennis courts and a putting green which it hired out to clubs and individuals.

The famous Three Town Show, held jointly by Romford, Dagenham and Hornchurch Councils, was held in 1947. This drew large crowds to the bandstand, bees and honey exhibits, rabbits, handicrafts, model railway and an unusual novel feature, the aquaria exhibits.

The main emphasis however was on ‘self-sufficiency’ in growing your own fruit, vegetables and flowers. Another popular exhibit was the poultry, where ‘back-yarders’ discussed the merits of the Bantams against the larger Light Sussex Breed. The Mayor at the time - Alderman Chaplin JP. Said “this is our most ambitious show that Romford had ever put on”.

Most of the labour in the park was carried out by the unemployed by arrangement with the Unemployed Committee — this provided them with work and kept labour costs to a minimum. Furthermore, much of the foliage was donated by R H Page, in particular, fifty-three Lime Trees in 1922.

Of course back then, the Council provided funds for a Gardener and Gardener’s Assistant. The gates and fencing cost £77 and 10 Shillings courtesy of Messrs Bayliss and Jones — a far cry from the cost today.

Nellie Sims, Romford’s favourite flower girl, recalled during these hard-up-times of the 30s, that to survive boredom and lack of money, the ‘workless league’ formed their own football team and some grand matches were played in Cottons Recreation Ground on Thursday afternoons. This day was chosen because most of the worthy opponents were shop and store staff – and worked half days on Thursdays.

The Wooden Sculpture memorial installed in 2009 dedicated to the six people who sadly lost their lives in Cottons Park during World War II. At 11.30pm on the night of 17 October 1940, during the Second World War, a line of bombs started to fall near Allen’s car showroom, then all across Cottons Park to Recreation Avenue.

Tragically, one of the three bombs that landed in the park fell close to the parks underground public air raid shelter -  as there were no ‘blast walls’ in front of the shelter entrance, six people out of the nine inside were killed.

It seems strange that these young families were taking shelter there at this late hour. Mrs Theresa Alborough has kindly given the reason: these two families had their own Anderson type air raid shelters in their back gardens, but were both being lined with concrete at the time. The concrete was to stop the water seeping in to these semi-underground shelters and having to bail them out every day. It is known that one of these families’ owned a bicycle shop opposite the park where the Ming Court is today.

During the World War II days, the ground in Cottons Park, from Recreation Avenue to the old tennis courts, was turned over and used as allotments, so local residents could ‘Dig for Victory’ as the war time expression encouraged. A line of houses in Marks Road that backed onto Cottons Park was compulsory purchased and demolished in the 60s.

These plots were given over to the park to compensate for new retirement homes (the Rotunda) being built on park land. That is why the odd numbered houses in Marks Road start at 131. An old path, seemingly going nowhere in the park, was the back garden entrance to these missing houses.

The park proved to be very popular with the flower beds, bandstand and park benches. In 2002, the Friends of Cottons Park were formed, and through their partnership working with the Parks and Open Spaces department, funding became available to carry out improvements in the park.

These improvements have included the provision of new fencing, new play equipment, a multi-use games area and an excellent urban sports facility.

There is a large play area situated towards the centre of the park. There is also a multi-use games area and a skate park. 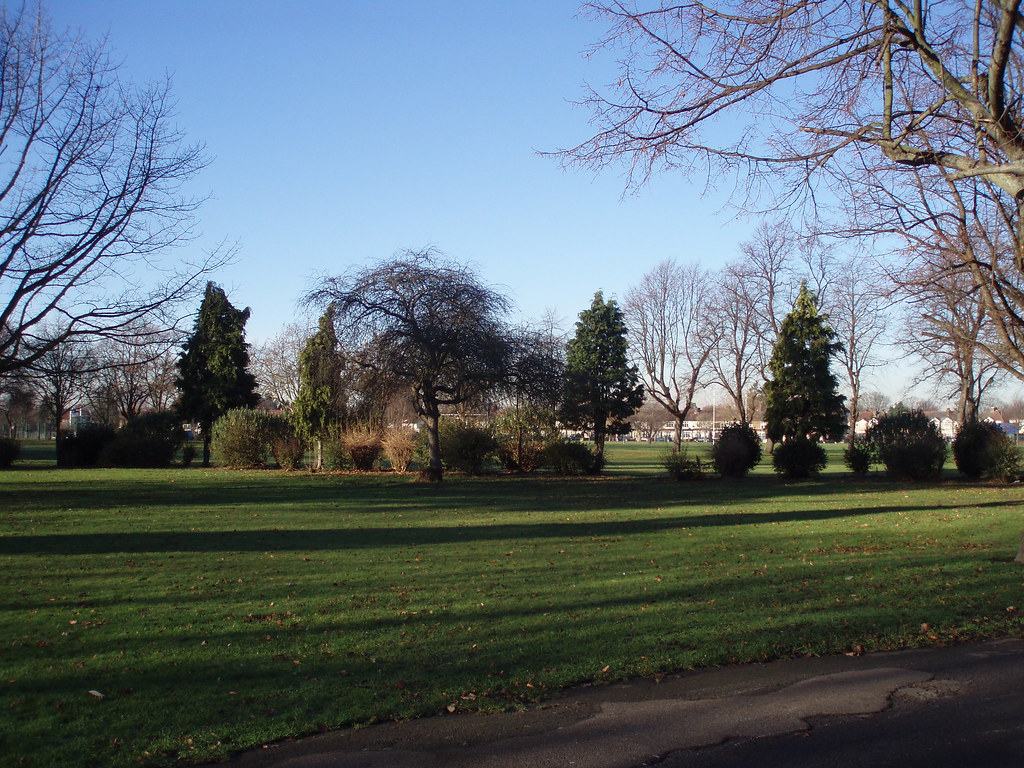