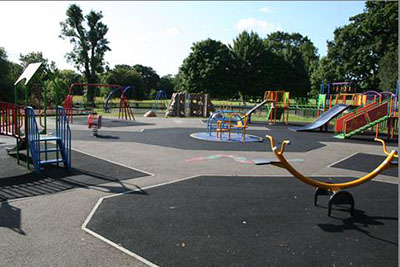 Harrow Lodge Park is the borough’s largest urban park of 130 acres that serves the local and wider community and is situated within the residential area of Hornchurch.

It has a variety of uses from informal recreation to large scale events, including the annual borough show.

There are 2 children’s play areas in the South and North of the park.

There are 2 multi-use games areas at these locations with skate equipment and tennis courts in the South, and a Parkour area in the North.

A café is situated in the centre of the park who also hires out pedal boats on the lake.

Harrow Lodge park is an open park with several access points to the site. Many are informal entrances which come off the public highway or via alleyways. There are three vehicle entrances and car parks leading from Hornchurch Road, Warren Drive and Upper Rainham Road.

The Hornchurch Sports Centre is situated in the north of the park, and although it is owned by the council, it is managed by SLM as part of a borough-wide sports management contract. Customers access the centre via Hornchurch Road and can use the car parks around the building or the nearby park area.

The park has a varied landscape with woodland areas, amenity grassland, conservation areas and two lakes which are fed by the River Ravensbourne running from the northern boundary of the park. There is also the ‘Secret Garden’ located by the side of the Harrow Lodge house in the north of the park, and a mix of shrub beds throughout the park.

There are some large conservation areas at Harrow Lodge Park, mainly to the north of the lakes and extending down to Upper Rainham Road, around the woodland. There is a good mix of conservation areas and amenity grassland to give the park both a natural and formal environment. The areas chosen took into account the more wooded area of the park to maximise wildlife benefit.

Two wildflower meadows were created in 2016. The first was from a disused paddling pool that was filled in with soil and seeded. The second larger area was created after landscaping works were carried out to the area at the rear of the Boathouse Café.

The slope was reduced and work was done to clear vegetation, thereby giving the area a dark look. This was then sown with a native wildfowl mix.  A third meadow was created in 2017 along the boundary of Upper Rainham Road in area recently cleared of old shrubs, to open it up and give better sightlines across the parks.

The Lake in Harrow Lodge Park was created in the mid 1950s by the damming and widening of the River Ravensbourne that flows through the park. The lake is home to a number of aquatic bird species - large amounts of Mute Swans and Canada Geese, but also more unusually Egyptian Geese, the rather timid Grey Heron and the occasional Cormorant.

There are free car parks at the Warren Drive, Upper Rainham Road and Hornchurch Road entrances.

Elm Park station, on the London Underground District Line, is close to the park and is a short walk away from the Warren Drive entrances.

There are direct several bus routes to the park from the surrounding town centres of Romford, Collier Row, Rainham, Upminster, Hornchurch and Elm Park: 248, 252 and 165 bus routes all stop by the park.

Harrow Lodge Park is not on the schedule to be closed in the evening; pedestrian access in unrestricted. However, the car park at Warren Drive is secured half an hour after dusk. Exceptions may occur. Contact 01708 434743 for more specific daily details.

Harrow Lodge Park is formerly the manor of Maylards Green and Wybridge. The original name is derived from the Mayloor family who held the manor in the 13th and 14th centuries.

The manor of Maylards Green and Wybridge comprised two ancient tenements, lying respectively north and south of Bowles Brook, also called Wybridge River, a tributary of the River Beam. The name Maylards was corrupted in the 19th century to Maylands, a form preserved in Maylands Avenue, Elm Park.

Maylands was probably named from the Maylour family, which was recorded in Hornchurch in the 13th and 14th centuries.

In 1237 Hornchurch priory quitclaimed to Walter of Wybridge ½ virgate of land in Hornchurch, in return for which he granted the priory at Wybridge. The priory lay south of Bowles Brook and east of Abbs Cross Lane.

Early in the 13th century the priory also acquired a four-acre grove called Waterbrook, which lay on the Dagenham boundary, north of the confluence of Bowles Brook and Beam River. This land was beside the grove of Walter of Wybridge on the north, between Dagenham and the public way towards Walter's gate.

Walter of Wybridge died in 1251, holding three tenements within the manor of Havering representing a total of 155 acres.

By 1799 the estate included Wybridge as well as Maylards. (In 1849 Maylards farm comprised 165 acres and Wybridge farm 276 acres. Both farms survived until the Elm Park area was developed after the First World War. In 1849, the combined manors totalled some 440 acres, and the park was developed for public use in the 1900s.

As part of the planning agreement with Hornchurch Urban District Council, Costain donated 34.86 acres to the Council in 1936, ‘for use as a public open space’. In 1937 this land was added to Harrow Lodge Park which had only been started in early 1936 when the Council paid the London County Council £16,250 for the 42 acre Harrow Lodge Farm.

An 18th century building opened in 1936 as the first public library in Hornchurch. An oak fence was later erected around the park. Football pitches were in use and outbuildings had been adapted for changing rooms, but none of the paths were laid, and at least one field had just been sown with grass seed.

Many of the early plans for this park were delayed by the war, when 60 acres of land was used for intensive food production, and following the cessation of hostilities the local council, took it upon themselves to transform the site into a recreational centre.

One happy development of the war years was the paddling pool built in 1944 for the Holidays at Home campaign; this remained a popular attraction for many years afterwards. The playground was developed with a major addition of new equipment in 1951. In 1957, three ‘box type’ swings were added, creating the features popularly associated with childhood parks. The park became a popular centre for sport.

In 1947 the first land released from food production was converted into two cricket pitches, and during 1948 a disused pit adjoining Rainham Road was filled in and four tennis courts were constructed. An 18-hole miniature golf course was set out in 1952 and a boating lake followed during the years 1954 to 1956.

The cricket pavilion was erected in 1960. By the 50s there were also netball courts.

Following the success of a bowling green at Haynes Park, another was laid at Harrow Lodge Park, on land acquired through compulsory purchase.

The park was big enough to accommodate the building of the Hornchurch Swimming Pool, officially opened in 1956. In 1960 a swim would cost 9d for a child and it was possible to hire trunks for 6d. In 1987 the pool was redeveloped as Hornchurch Sports Centre.

After the war Harrow Lodge developed as the main nursery for Hornchurch Urban District Council, with the first greenhouses provided in 1947 and heated frames added by 1960. The park included showcase carpet beds outside the swimming pool and a rock garden was established as early as 1948. When the London Borough of Havering was created in 1965, the nursery at Harrow Lodge remained.

The government instigated changes in the management of public parks in the 1980s, which saw the end of the council’s nurseries.

One major development within the park was the Garden for the Blind, opened in 1961. This garden had wider pathways and aromatic plants with a centrepiece dolphin fountain creating sound for visitors.

Though the garden declined over time, it has been revived in recent years through the efforts of volunteers and is known as the Secret Garden.

In recent years, the paddling pools have been filled in and new play and recreation areas created. The demand for increased biodiversity in urban parks resulted in the creation of conservation areas throughout the park in 2010.

In 2014, as part of improvements to the lake, wind-powered aeration units were installed as well as new bubble fountains.

The Council recognised that significant investment was required to improve the standards of the park in 2015 and a ‘Site Safe’ depot unit was installed shortly afterwards.

This is where the new Park Ranger, Grounds Maintenance staff and apprentices now work from.

Food and refreshments are available at the kiosk by the lake.

Two play areas in the north and south of the park.

Tennis courts in the south.

Parkour course in the north.

There is a free 'Trim Trail' around the park. View the map here.

There are toilets available in the kiosk. 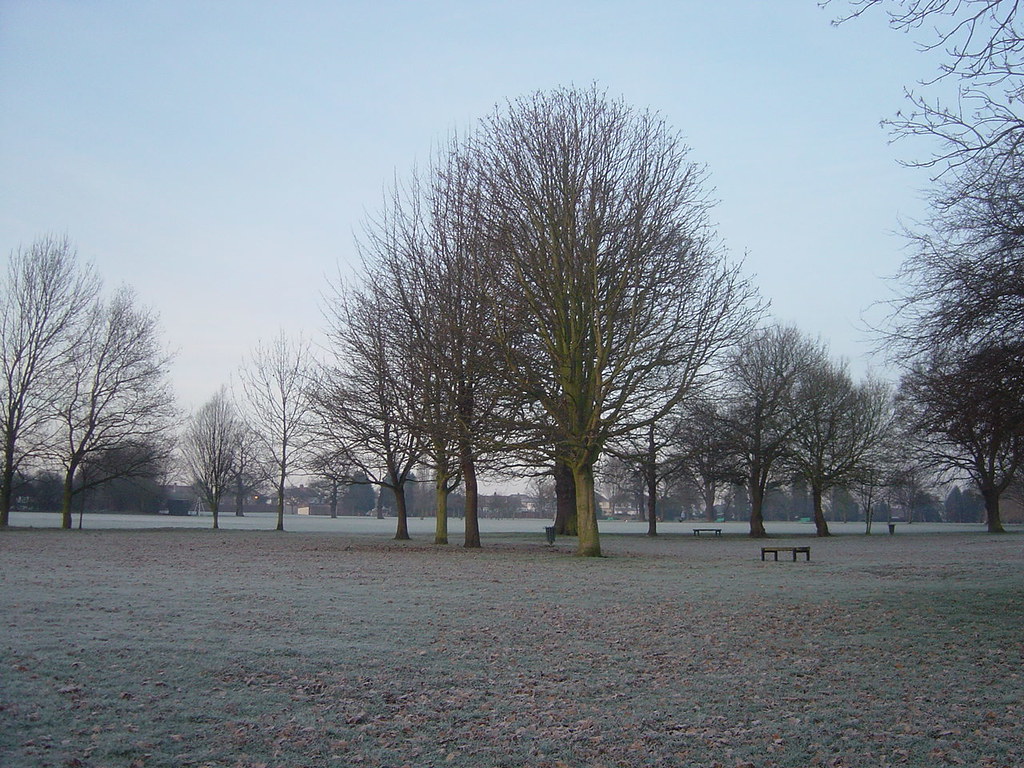