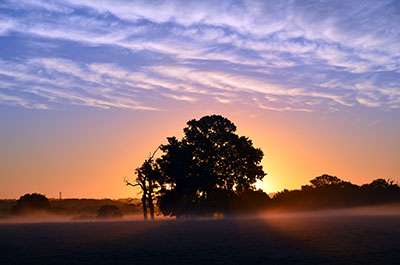 Known locally as The Manor, Dagnam Park covers open fields, mature woodland and established ponds. It has a rich, interesting history as well as being abundant in natural fauna and flora.

Dagnam Park is a mosaic of largely semi-natural and ancient woodland, with indicators such as Bluebells, Dog's Mercury and Butcher's-broom.

Dagnam Park is judged to be of local importance for its flora and Fallow Deer population.

Photographs captured by Don Tait of Friends of Dagnam Park.

The site also preserves a fascinating historical record which stretches back into the Middle Ages.

Dagnam park, formally laid out by the well-known landscape architect Humphrey Repton, preserves its original 18th century boundaries together with a number of original landscape features including copses, ponds and specimen trees. Look out for mature conifers, horse chestnuts and cedar.

Although the site of the original house is bare, excavations works carried out by the friends group have unearthed its foundations allowing visitors to walk the house layout. Further excavation works have also uncovered the stable yard and an area of the walled garden.

There is also a scheduled ancient monument, Cockerell's moated site (of Dagnam Park Farm), in the south of the site - now a well-known breeding pond for great crested newts.

There is also evidence of medieval field patterns - see if you can spot the medieval road running along the sites eastern boundary!

The nature conservation interest in Dagnam Park, Hatters Wood and Fir Wood is recognised in its designation by the Greater London Authority as a Site of Metropolitan Importance for Nature Conservation.

Nearby Duck Wood is also designated as a site of Borough Importance for Nature Conservation.

There is a car park at the Settle Road car park.

Born in 1731, Richard Neave, the eldest son of James Neave of Walthamstow and London, had made his fortune trading in the West Indies and the Americas when slave trading was at its height. At various times he was chairman of the Ramsgate Harbour Trust, the West Indian Merchants and of the London Dock Company, as well as a director of the Hudson’s Bay Company.

In 1783 he was appointed Governor of the Bank of England, (a position subsequently held by his grandson Sheffield Neave in 1851). The purchase of Dagnams in 1772 marked the beginning of Richard Neave’s transition from merchant to country gentleman.

At this time he was the tenant of the Bower House at Havering-atte-Bower, where he remained until 1776.

The intervening four years saw the house that was once visited by Samuel Pepys (read Pepys' diary entries for the Dagnams visit) pulled down and the Georgian mansion, which stood until 1950, erected in its place.

Neave further established his position among the local gentry with a land purchase policy, begun in 1785 and continued by his successors throughout the next century, which saw the Dagnam Park estate swell to 1,600 acres.

Richard Neave's social ambitions were realised with his appointment as High Sheriff of Essex in 1794 and more importantly in 1795, when he was created a baronet. He died in 1814 and was succeeded by his son Sir Thomas.

Sir Thomas’ additions to the Neave estate included the Bear bought in 1820 and the Manor of Gooshays in 1829. He was Steward of the Liberty of Havering-atte-Bower in 1806 and 1809 and a magistrate under the charter of the Liberty in 1826 and 1828. Neave was appointed sheriff of Essex in 1828.

The Church of St. Thomas and the Priory were both built for Sir Thomas in the 1840’s. The school at Noak Hill, built by subscription and government grant, opened in 1848 - the year Sir Thomas died.

Dagnams was then inherited by Sir Richard Digby Neave, grandson of Sir Thomas, (who was a close friend of the famous landscape artist John Constable). It was Sir Richard who purchased Brick Kiln Farm and Spice Pitts Farm before his death in 1863.

The fourth baronet, Sir Arundell Neave lived until 1877 when he was succeeded by his son Sir Thomas, then only 3 years old.

The park and gardens had been laid out in the late seventeenth or early eighteenth century, however, in 1812 the famous landscape gardener Humphrey Repton, who lived at Hare Street, was reputed to have redesigned the layout of the gardens though evidence for this is scanty.

It has been written that this house was built on a different site to the two earlier brick buildings, and on Ordnance Survey maps of the early 20th century, 'Remains Of Dagenhams' appears a little to the north west of the house.

A comparison of the estate maps of 1633 and 1748, with a map of the area from 1920, even allowing for inaccuracies in the surveying, would suggest that the same site was probably used for all three houses. Brian Lingham in his book 'History of Harold Hill and Noak Hill', suggested that it would be logical to use the foundations of the old house, and refers to a Charles II walled garden, mentioned by Lady Dorina Neave in her book 'Romance Of The Bosphorus', which was retained as part of the grounds attached to the new house.

If Dagnams ever was on a different site to the Neave house, it would seem likely that it would have been the moated house which appears on the 1633 Dagnams Estate map.

“The house had three stories with six rooms to each floor. On the ground floor, to the right, were the drawing and dining rooms, with an ante-room, and to the left, were billiard and smoking (study) rooms with another ante-room. The rooms were entered from a large main hall, from which staircases ascended on both sides to a landing on the first floor.

The first floor landing continued as a central corridor on both sides of the house from which the main bedrooms of the Neaves and their guests were entered. On the top room were bedrooms for the governess and senior servants; also the nursery and schoolroom.

The majority of the servants lived in an annexe built onto the east side of the house, where the kitchen and other domestic rooms were located. The butler had a waiting room and bedroom in the main house at the back of the stairs on the ground floor”.

Sir Thomas Neave 5th Bt. married Dorina Lockhart in 1908. Though the title was passed on to their eldest son Arundell on the death of Sir Thomas in 1940, they were the last to truly live as Lord and Lady of the Manor of Dagnams.

Before the First World War they employed over 40 servants and the only other work in the locality was on the estate farms. Even when the farms were sold in 1919, the Neaves remained important figures in village life and are well thought of by those villagers who remember them.

Following the First World War, Sir Thomas Neave 5th Bt., like many of his fellow landowners, sold a large portion of his estates. Alfred Savill and Sons arranged an auction for 2.30pm on Monday, 26th May 1919, at Winchester House, Old Broad Street, London, which saw Sir Thomas dispose of his entire Essex holdings at Burstead, Rayleigh, Canvey Island and Eastwood.

Included in the sale were 1,506 acres of the Dagnam Park Estate, only leaving Dagnams, the park and Dagnam Park Farm, which amounted to 550 acres, in the hands of the Neaves. The sitting tenants of the farms on the estate were given the option to buy their land before the sale and most did so.

The farms sold in 1919 were Manor Farm, Maylands, Gooshays, New Hall, Harold Wood, Brick Kiln, Harold Hill, Spice Pits and Hill Farm. Also included in the sale were The Bear public house, the Keeper’s House, Angel Cottages (which had once been a public house) and other cottages and plots of land on the estate as well as a factory site near Gidea Park Station.

The end of Dagnams really begins with the start of World War II and the death in 1940 of Sir Thomas Neave 5th Bt. The story of the decline was recounted in a letter printed in The Essex Countryside in 1981. It was sent by Dorina Eileen Parsons ne Neave, the daughter of Sir Thomas and Dorina Lady Neave to Mr A.F. Kilby, and was a response to a letter printed in the magazine from Mr Kilby.

Sir Arundell Neave 6th Bt. had, however, agreed to the sale of Dagnams before the compulsory purchase order was obtained - though there is no doubt he had little option but to sell. The Neaves had moved to their home in Anglesey at Llys Dulas for the duration of the war. Clearly the damage suffered by the building (very visible in the photographs taken prior to demolition) would have cost an awful lot of money to repair.

The LCC had planned to save the house and indeed were legally bound by a Ministry of Planning Order which had also specified that the barn at New Hall Farm, New Hall farmhouse itself, the Priory and Cockerell’s Moat, were not to be removed. Essex County Council, Romford Borough Council and the LCC all stated that they could find no use for the building.

By January 1950, the Ministry had released the LCC from its undertaking to preserve Dagnams and the house was demolished later that year, with the demolition team removing the spoils as payment.

Much of the bric-a-brac was to be distributed among the villagers at Noak Hill by Lady Dorina Neave at a charity bric-a-brac sale whilst returning to Noak Hill in 1950 to open the new Victory Hall. At the same time, she donated a copy of the valuable Guido Reni painting, Fortune Flying Over The World, which had once graced the mansion. Lady Neave commented bitterly on the ‘vandalism of the LCC’.

Del Smith comments (2003): "Despite the Neaves having a prestigious art collection, the newspaper reports that the original Reni painting had been donated to the people of Noak Hill was false; it was in fact a copy.

Little remains to give a clue to the whereabouts of Dagnams - fence posts, some foundations, the floor of the stables and the concrete pool which appears in the map of 1748 being the only real signs of a glorious past. However, the park remains, and the family and their house are remembered in some of the street names of Harold Hill."

You will be able to view the Dagnam Park management plan here.

There are no toilets available on this site.