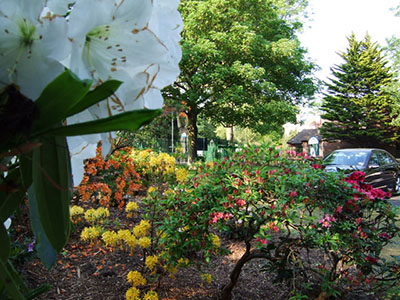 The site covers an area of 12 acres and features gentle hills and a brook that runs along the spine of the park.

This park also features a  7 ¼ inch gauge miniature railway track operated and managed by the Havering Miniature Railway Club. This track runs as a 2,500 foot loop around the park and the club often host running days and large event days.

The facilities include two tennis courts, a bowling green and a large children’s play area.

The site is the most southern of four parks that form a walkway from Romford to the green fields to the north of Havering.

Silver Gilt award for 'Large Park of the Year', London In Bloom 2019

Lodge Farm Park is very well used by the local community and its main functions are to provide for sports activities and passive recreation.

The park has four access points, the main gates being on Main Road. This entrance also has a small pay and display car park.

The entrance to the southern end of the park is from Carlton Road. This also has a small pay and display car park.

There are two pedestrian entrances at Kingston Road and Lodge Avenue.

There are two bowling greens on site. One is functional with an active club and the other is used by Havering’s Miniature Railway Club.

Black's Brook runs alongside the Western Boundary of the park and is managed by the Council’s Flood and Rivers Officer and the Environment Agency. This brook travels from Bedfords Park, through Rise Park and Raphael Park before entering Lodge Farm Park.

This park has both a meadow area and butterfly border, which have made an improvement in wildlife value. A walk through the areas in summer will show a noticeable increase in crickets, grasshoppers, bees and butterflies.

There are two pay and display car parks - one on Main Road and one on Carlton Road.

Lodge Farm Park is on the Southern side of Main Road from Raphael Park. The land to form the park was acquired by the Council in 1927, although the public park was not completed until 1963. It formed part of Thomas England’s vision of a ‘Green Lung’ running through the borough.

Close to the main entrance to the park on Main Road is Black's Bridge. The bridge was designed by James Wyatt and was built in the late 18th century. It is constructed of red brick, with three large moulded stone elliptical arches.

It was constructed when the grounds of Gidea Hall were landscaped and enlarged by Richard Benyon c.1776, possibly to the designs of Richard Wood. The bridge was required to span the widened Black's Canal.

This canal was initially formed by damming and redirecting a tributary stream that fed the various water features of the earlier formal gardens of Gidea Hall. Where the canal passed through the estate of Gidea Hall, it was widened to form a large serpentine lake.

The historic bridge is Grade II Listed of Special Architectural and Historic Interest.

The owners of the Estate of Lodge Farm, Roger Reede’s Charity agreed to lease the farm and premises of Lodge Farm for fourteen years to the Agent of the High Grade Dairy Company. The land was to be used for farming only.

The lease included the Farmhouse and associated buildings including all barns, cart sheds, cow &cattle sheds and greenhouses.

It was described as ‘A farm consisting of a dwellinghouse called Neades otherwise Staceys Farm’ (although at the time of the sale, the property had been commonly known as Lodge Farm for the previous thirty years).

However, the land being sold did not include Lodge Farmhouse and the associated buildings. The land to be sold stretched from a point at the North, known as Black's Bridge, to Carlton Road in the South. The land was sold to the Council for £1,350.

Sometime after the land was acquired by the Council, it began to be used as a rubbish tip for town refuse (It is uncertain when this was decided by the Council or when tipping commenced). After tipping was completed the land was left uncultivated for some years to allow for settlement.

22nd November 1937: The Council minutes record that a petition was received from the residents of Kingston Road. They were complaining that the Council had formed a second tier of refuse contrary to a previous understanding and the level of the tip was 10 feet or more above the level of the ground.

It was agreed by the Committee that every step would be taken to prevent any further nuisance being caused.

It was also agreed that when work was completed, a belt of trees or shrubs would be planted next to the fences of the Kingston Road houses.

20th March 1950: It was recorded in the Council minutes that fencing and gates be provided for the Carlton Road frontage of the open space, in accordance with the borough surveyors estimate of £50.

2nd November 1954: The Council minutes record that the Finance Committee had referred to the Committee for consideration of the provision of a new enclosed swimming pool.

It was agreed in principle, that the new pool would be situated in Lodge Farm Park Recreation Ground. Detailed work and designs were obviously carried out for a number of years on the proposed swimming pool project, including the construction of a scale model of the pool (that cost £140).

30th October 1956: A note in the Council minutes refers to a request that the entrance gates to the recreation ground should be opened so the grounds can be used by children.

The committee agreed to adhere to their previous decision that the recreation ground was not suitable for use at the present time and that until funds were available for levelling part of the grounds, cutting the grass and providing an attendant, the gates should not be opened.

26th May 1959: The Council minutes record that the Minister of Housing and Local Government had informed the Council that he would not approve the use of the land at Lodge Farm Recreation Ground for the new pool because of the restrictive covenant on the land precluding this use.

This was obviously quite a difficult decision for the Committee and they decided they would not abandon the project, but they would need to agree an alternative location.

In 1961, a comprehensive layout scheme for the park was prepared and agreed by the Council, including the provision of two bowling greens, a pavilion, a children’s playground with shelter, a depot and mess room for the staff.

9th October 1962: The Council minutes record that the construction of the park had now been completed, with the exception of certain trees and shrub planting. It was agreed that the park should be brought into public use forthwith.

There is no record of an official opening for the park.

In the 1960s, the Romford Official Guides were promoting a delightful long distance walk through four Council-owned parks including Lodge Farm, Raphael Park, Rise Park and Raphael Park from the centre of the town to open countryside and Havering Ridge.

The opening of the new bowling green at Lodge Farm Park was celebrated in May 1963, with a match against the Mayor of Romford and his councillors, which Romford won comfortably to get their new home off to a successful start.

The most notable feature of that match was that the Mayor that year was a woman - Mrs. Roberts - but the newly elected president allowed her to play!

In 1966 the Parks Brochure records that the following staff were employed in the Park:

In 2008, Lodge Farm Park was awarded a Green Flag, following an investment programme from Havering Council and a schedule of works assisted by the Friends of Lodge Farm Park and Raphael Park.

There is a large fenced playground in the centre of the park. 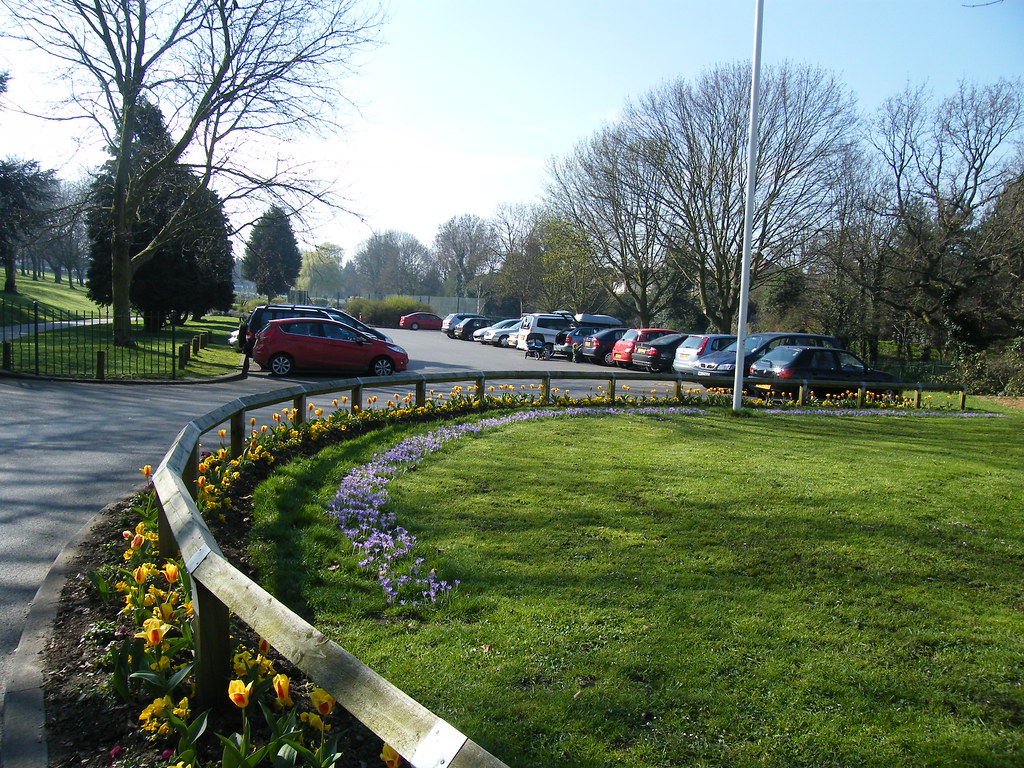