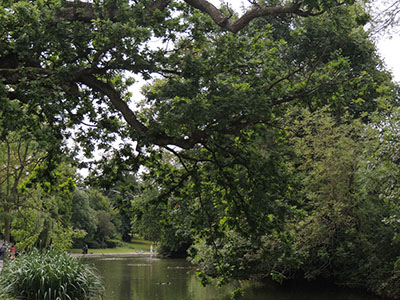 At 44 acres, Raphael Park is one of the larger flagship parks within the Borough.

It offers a range of facilities and features in a lakeside location for formal and informal recreation, including sports pitches, tennis courts, ornamental gardens, an ornamental lake, mature trees a café/restaurant and a kiosk with public toilets next to the children’s play area.

The park was restored during 2013 with funding from The Heritage Lottery Fund, Veolia North Thames Trust and Havering Council.

Raphael Park formed part of the Gidea Hall Estate where it was used as residency for royalty and several well-known families.

The land that is now known as Raphael Park was gifted to the Local Authority and opened as Havering’s first public park on 2nd June 1904.

The park still retains many of its historic features, Black's Bridge, Black's Lake, Black's Brook, The Bandstand and The Park Lodge.

These are regularly inspected by the Park Manager who liaises with the Historic Buildings and Landscape Officer within the council who advises on how best to proceed.

Raphael Park has a body of water called Black's Lake which is fed by Black's Brook. Both of these are original 18th Century features of the park and so management of these environments is key.

In 2013 the Friends of Raphael and Lodge Farm Park secured funds from the Environment Agency to install pre-planted coir bundles along the margins of Black's Lake.

Black's Brook runs alongside the Western Boundary of the park is managed by the Councils Flood and Rivers Officer and the Environment Agency.

Management of this watercourse is proving beneficial and species such as Common Frogs and Kingfishers can regularly be spotted using the Brook.

The bandstand in the park was originally built in 1904. The bandstand was used for performances by local musicians and groups.

Unfortunately, the building fell into disrepair and was refurbished in 1948.

External funding in 2013 and 2019 was used for further improvements.

There is a pay and display car park across the road, near the Main Road entrance, by Lodge Farm Park.

A settlement of some importance has existed at Romford for many centuries. Pre-Roman times, it is believed that the area was inhabited by the community of the Trinobantes, a Celtic tribe which occupied all the land north of the Thames.

By the time the Romans invaded, the Trinobante capital, located at Colchester, was considered to be the capital of Britain.

The modern A12 is on the alignment of the original Roman Road from Colchester to the London basin, from where the Romans spread out across Britain, establishing settlements/military posts including Durolitum in the Romford area.

The site of Raphael Park formed part of the royal manor that served the ancient Royal Saxon hunting lodge at Havering.

In the mid-11th century, Edward the Confessor (1003-1066) built a royal palace at Havering-atte-Bower and carved out the Manor of Havering.

The Manor stretched from the Thames in the south to Havering-atte-Bower in the north, thus including the area now known as Raphael Park.

By the reign of King John (reign 1199-1216) the Manor of Gidiehulle (Gidea Hall) was established north of today’s Main Road and included the land now known as Raphael Park.

The location of the Gidea Hall estate was important and strategically located for safety, access and royal patronage.

In 1452 the Estate was acquired by Sir Thomas Cooke, a London draper who became Lord Mayor in 1462.  He became the first of a long succession of London merchants who, having made their fortunes, withdrew to South Essex in an attempt to become country gentlemen.

The Cookes established the most important estate in the Liberty of Havering, retaining ownership of the Gidea Hall Estate until the 17th century.

The Gidea Hall Estate was sold in 1658 to Richard Emes, and it then changed hands several times between 1658 and 1710 when it was acquired by Sir John Eyles, Sub-Governor of the South Sea Company and joint Post-Master General.

In 1720, the Hall was rebuilt as a three-storey mansion in classic Georgian style and the moat was retained.

Richard Benyon, who acquired the Estate in 1745, had been the Governor of Fort St. George in Madras, India.  The Benyons made various improvements and alterations to the Hall and the Estate’s grounds.

Late 18th century preferences focused on elegant curves and graceful sweeps in contrast to the stricter style of the earlier period. The Estate was enlarged and a series of modifications were carried out in the late 1770s.

By 1871, both of the gatehouses by the main entrance along Hare Street (now Main Road) were inhabited. The Estate was eventually sold in 1883 to the Lands Allotment Company for the purpose of housing development.

The Lands Allotment Company failed to develop the land and the group collapsed, with the Estate being put up for sale once again.

In 1897, Sir Herbert Raphael, a businessman who later became barrister and liberal MP for South Derbyshire, purchased the Gidea Hall and estate in 1897, and thereafter it was gradually divided and redeveloped.

In 1901 Sir Herbert approached Romford Urban District Council (RUDC) with an offer of land for a park, and this marked the beginnings of Raphael Park.

A competition was held in 1902/03 to design the Park, with entries in keeping with the new spirit of the age - the modern arcadia.

The winning entry was by Mr H.T. Ridge, an assistant surveyor working for the Council. His design saw the Gidea Hall estate’s former grounds and 18th century features sympathetically incorporated into the Park’s layout.

These included the Spoon Pond, the woodland area, Black’s Lake, Black’s Bridge, the gatehouses, a section of the main carriageway and the western end of the pleasure grounds.

In terms of the preparations that did take place for the park’s opening, new gravel paths were laid out, wrought iron railings and gates were installed (1903), an order was placed for public toilets, and a Park Lodge (designed to be occupied by the Park Superintendent) was constructed (1903/4).

The gatehouses near Black’s Bridge were no longer inhabited, and one had already been turned into a shelter.

The park was also designed for active recreational pastimes, and games such as football and cricket were catered for.

Raphael Park was officially opened on Thursday 2nd of June 1904 by Mr and Mrs Raphael, and approximately 5000 people attended.

Mrs Raphael planted a tree opposite the new superintendent's lodge to commemorate the opening.

During World War I Raphael Park was used by the army, who combined Gidea Hall and Hare Hall as an army camp.

A number of features were added between 1920 and 1940, including tennis courts, two pavilions, a refreshment kiosk and play equipment.

The inter war years were important in establishing the park as a key venue for the local population. This period saw, for the first time, the employment of gardeners by the council, which was critical to ensuring the Park remained an attractive and interesting place to visit.

Many organisations applied to hold their annual events in the park, and the introduction of new facilities made the Park a popular venue for sporting activities.

Romford Borough Council succeeded RUDC in 1937, by which time the council managed a number of other parks and had its own nursery at Bedfords Park. Raphael Park, however, remained the borough’s key park and, together with Rise Park and Bedfords Park, formed part of the green chain linking the town to the countryside.

Ornamental wooden fences and a low wall located by the edge of Black’s Lake are additional features which are thought to have been added during the 1960s.

The early 1960s also saw the establishment of the annual Shakespeare in the Park performances, organised by the Romford Summer Theatre.  The importance of parks was re-emphasised in 1965, when the London Borough of Havering succeeded Romford Borough Council.

In 1975, land was exchanged to permit the construction of Jubilee Court, adjacent to the south-eastern boundary of the Park.

Improvements to the rockery area at Raphael Park were carried out in 1983.

Whilst it is unclear exactly when a stage was first constructed in the rockery, consultation with the Romford Summer Theatre Company has revealed that they have carried out performances in the rockery since the early 1960s.

The 1980s and 1990s saw a reduction in the budget and a shift towards basic general grounds maintenance tasks.

The labour intensive planting of large swathes of bedding could no longer be sustained and the general quality of the Park’s maintenance started to deteriorate.

In 2004, Havering Heritage organised a very well attended centenary celebration of the opening of Raphael Park, which included a march, bands, dressing up and re-enactment.

2004 also saw the establishment of the Friends of Lodge Farm Park and Raphael Park.

In 2009, the play area in the northern end of the Spoon Pond was replaced by a new destination play area, designed in consultation with local school children and funded by grants from the Big Lottery and Playbuilder programmes.

On 4 June 2014, the newly restored Raphael Park was officially reopened, 110 years after the park was given to the people of Romford by Herbert Raphael.

There is a large fenced play area in the north of the park.

There is no outdoor gym on this site.

There are toilets available in Raphael's Restaurant and by Millie's Kiosk. 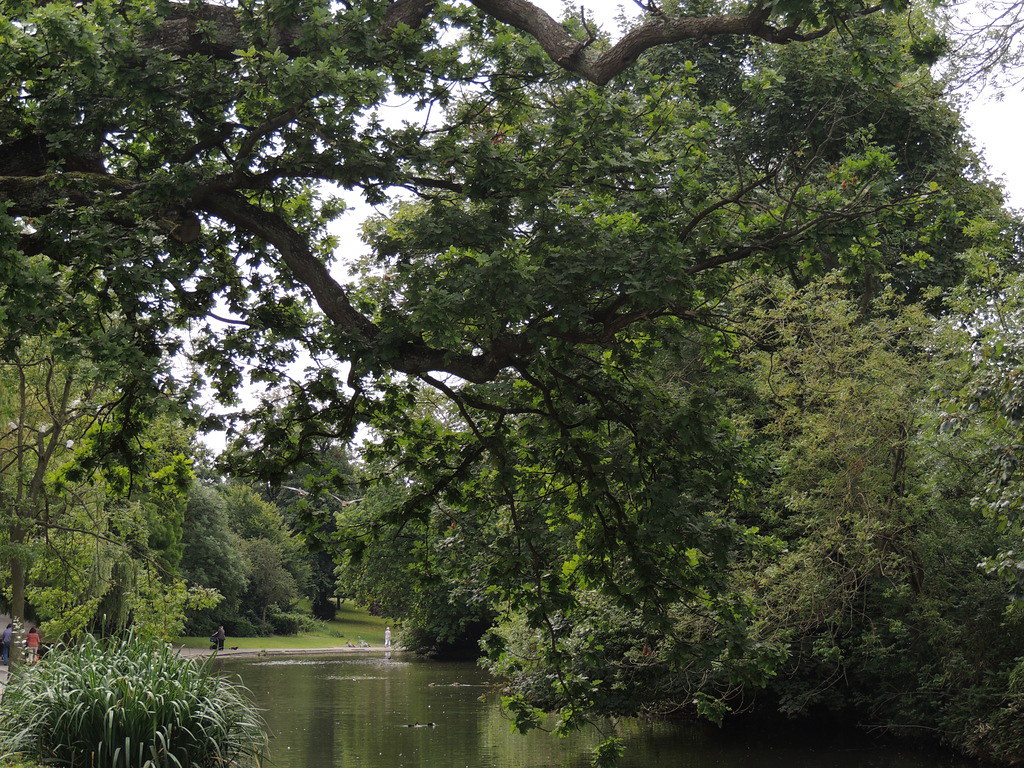