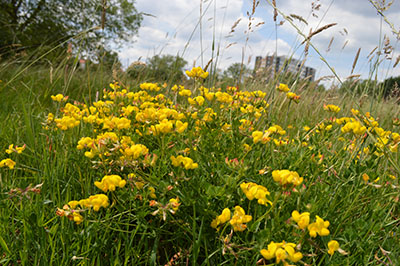 Haynes Park is a medium park of 11 hectares that serves the local community and is situated within a residential area of Hornchurch.

A public right of way running west to east and leading from Slewins Lane to Haynes Road splits the park in half.

The site has a mixture of landscape features with amenity grassland, a large conservation area and a small woodland.

The park is home to the Haynes Park Bowls Club that sits within a tall hedge bounded area.

The northern half of the park contains a play area, tennis courts and a multiuse games area for informal recreation.

The western boundary of the park has the River Ravensbourne running alongside it.

The southern half of the Park is unfenced and contains amenity grassland, a small conservation area and a small area of trees.

There is a car park on Slewins Lane.

The first mention of the word Haynes in the area is in 1492 in a document in New College, Oxford. A conveyance of 1664 identifies a “messuage called Haynes” for the first time and the “farmhouse called Haynes is recorded in 1694”.

The Chapman and Andre map of 1777 calls the area Gains, though it was more frequently written Hains or Haines before the twentieth century, and shows it by occupied by a Mr. John Miles.

The Plan of the Parish of Hornchurch with part of the Parish of Romford in the County of Essex 1812 shows Haynes Park as part of Thomas Jackson’s land of Bollands which he owned along with Hare Lodge and Clark’s Farm.

A sale of crops in 1832 identifies the premises by name as Haines Park Farm.

The Map of a District Comprising Hornchurch Parish and that part of Romford which lies south of the Turnpike Road from London to Brentwood Essex 1849 shows little obvious change to the landscape and Haines Park Farm is still not identified by name.

The farm and its occupants are not readily identifiable in the censuses of 1851, 1901 or 1911. However, by 1897 the property was owned by Mr Henry Arnold and farmed by Richard Banyard a dairy farmer of Nelmes Farm, Ardleigh Green.

In 1904 there was a fire on the farm and the damage was estimated at £270. The fire brigade of the time had their work cut out in putting out the fire.

By the mid-1920s, part of the Haynes Park Farm was developed for housing and the neighbouring Slewins Farm followed suit in 1928.

In the 1930s, improvements were made, such as entrance gates, public shelter and a bridge over the Ravensbourne from Northumberland Road.

In November of 1938 it was agreed that Salisbury Road School could use a field at Haynes Park for “unorganised games”. At this meeting it was also agreed that a nominal sum of 10/- would be required from Hornchurch Wanders’ for the hire of the pitch at Haynes Park.

In May 1941, a letter was received from Mr W.E. Johnson, a Warden, applying for permission for the Wardens of Group “A” Group, Hornchurch, to practice cricket in Haynes Park on Monday to Friday evenings inclusive between 7pm and 10pm.

The Committee recommended that a reply be sent stating that the park may be used by the Wardens of this group in the same manner that it is used by the public.

In 1942 the Holiday at Home Committee recommended that 100 park chairs should be moved to Haynes Park from the 2000 stored at Harrow Lodge Park to provide a break from the rigours of war for children in the neighbourhood.

The Pleasure Grounds, Entertainments and Fire Brigade Committee of Hornchurch UDC ordered that a 20ft square paddling pool and sandpit surrounds be installed. This was in place by 1946 when other improvements were made including tennis courts and a miniature golf course.

Toward the end of 1942 it was agreed to recommend that an application to use the proposed entrance to Haynes Park from Northumberland Avenue for allotments should be granted. This area now makes up the Northumberland Road Car Park.

Haynes Park Bowls Club, still the club on site, began in 1956 and made further improvements.

Unfortunately, the original wooden club house was burnt down in 1991 and a brick replacement built in 1993 with the club operating out of a couple of steel containers in the interim.

The football/tennis pavilion unfortunately suffered an arson attack in the early part of the millennium and had to be demolished.

The play area was refurbished and relocated to its current position so as to be more visible from and nearer to the main car park in 2005.

To reflect modern usage, one tennis court was changed into a multi-use games area in 2009, and the tennis courts were complexly refurbished with new surface and fencing.

Another significant change happened in 2012 when the decision was made to improve biodiversity within parks.

Haynes Park was one of the parks chosen; the area of the old miniature golf course was turned into a conservation area.

Haynes Park saw capital investment in 2015/16, and has seen improvements including new signage and parks furniture, a new path allowing separation from cars and pedestrians along the Slewins Lane entrance, and landscaping.

There is a fenced play area situated at the Slewins Lane car park. There is also a multi-use games area and three hard-surface tennis courts. 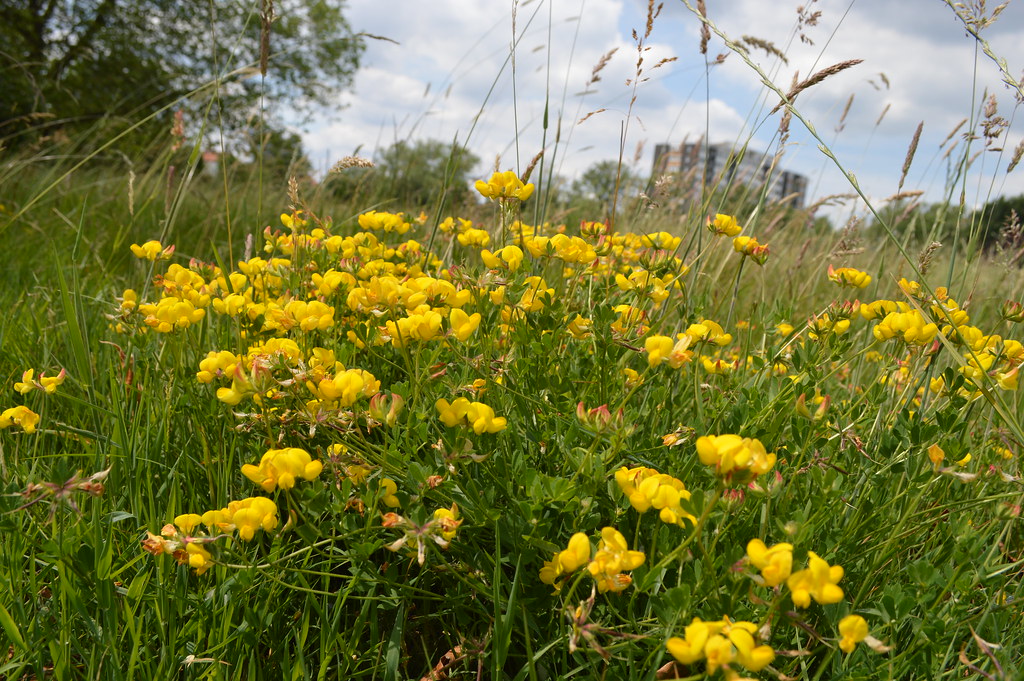