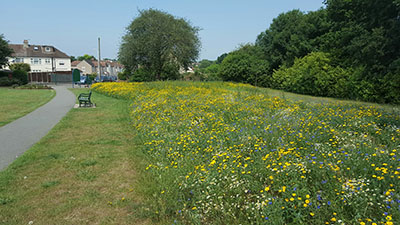 St Andrew’s Park covers an area of 7.5 acres. The park is mainly set to grassland on a slope that falls on a gentle gradient to the north.

The park has a hard surface path that runs around the perimeter, allowing year-round access.

In the south east corner, a disused tennis court has been converted into a child’s marked roadway for cycling.

The park has a number of formal features on the southern side, such as play area, multi-use games area and an outdoor gym surrounded by formal planting.

The park has two main entrances: one on Burnway and the other on Belleview. The eastern side of the park has a wildflower meadow and the southern side has more informal native species planting.

The central grassland is marked out for football during the winter.

St Andrews Park play area is split into two areas. The original play area is located in the north east corner of the park in a fenced area. The play area was refurbished in 2008 and the equipment caters for a good range of ages.

It was added to in 2015, with an additional toddler multiplay item funded by the Friends of St Andrews Park. The second area is situated just to the west of the original play area and was installed as part of the Play Builder Project in 2010.

This is an unfenced area and consists of more natural type play equipment.

A multi-use games area was constructed in the park in 2009. At the same time an eight-piece outdoor gym was installed south of the play area.

The Cycle area was created in 2010 out of a disused tennis court, a roundabout with shrub bed built in the centre of the area and then the marked up with a road layout. This is popular with children learning to ride a bike, and has also been used by the local Met Police teams for cycle proficiency training with schools.

There is a small conservation area at St Andrews Park, behind the ball court, which acts as a buffer between this and the residential properties

The areas have seen an improvement in wildlife value and a walk through the areas in summer will show a noticeable increase in crickets and grasshoppers, bees and butterflies.

Hornchurch began as the administrative centre for the royal estates and the centre of the parish. In the Middle Ages, Hornchurch became a wealthy town with its thriving leather trade.

This industry was so important that at one time the Hornchurch High Street was known as Pelt Street and its revenue was used by William of Wykeham to found New College, Oxford.

When New College, Oxford was endowed with St Andrew's and its lands (which are now the park), it appointed a Vicar Temporal to be, as the Book of Common Prayer would have expressed it, their 'Ordinary'.

As a result of this, the incumbent of Hornchurch enjoyed freedom from the jurisdiction of the Bishop. This was called a 'Peculiar' and ended in 1901.

Before 1901, the Bishop had to ask permission to enter the church. New College is still involved with the Bishop in appointing the Incumbent.

The grounds that now make up the park were acquired by Hornchurch District Council from St Mary College (New College) of Winchester in Oxford. The land for the park was acquired in two parcels, one measuring 2.92 acres and the other 4.38 acres, with the agreement signed on 19th May 1928.

Little development took place on the park pre-war. It was used as a green space for general recreation and winter sports. The main development of the park commenced in the 1950s, and continued through into the 1960s.

In the late 1960s, the park had a full time gardener and a park attendant. These were based in the park, in their own park staff building.

The park also had public toilets that disappeared when the staff cuts in the 1970s and 1980s reduced staffing numbers across many parks.

In 2008, there was a refurbishment of the play area, with additional equipment also added in 2010 as part of the Play Builder Project. In 2009, a new planting scheme was laid out around the park and it was submitted for Green Flag in 2010.

Play area with equipment for a range of age groups. 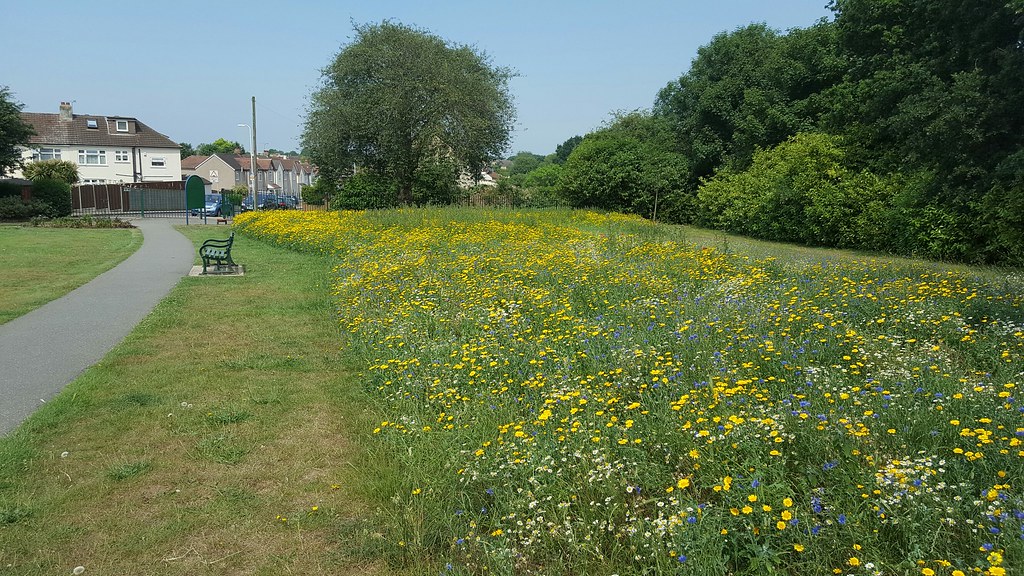