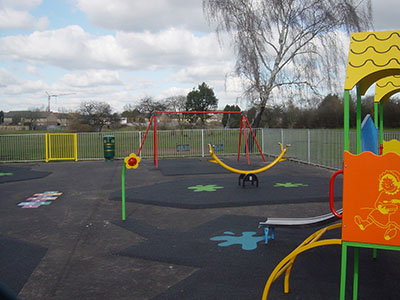 It is very well used by the local community. Its main functions are to provide a range of sports activities and as an area of passive recreation.

The facilities include tennis courts, a multi-use games area, a cricket table and a full sized football pitch during winter. During the summer period the same area is marked out as a running track and softball area for use by the local primary and secondary schools.

The cricket club that use the park have a small pavilion that is shared also Upminster Hockey Club. In addition, the park has a large children’s play area and an outdoor gym. The park is also served by its own small car park.

Gold Award in 'Large Park of the Year', London in Bloom 2019

Footpaths enter Upminster Park at five access points: St Mary’s Lane, Stewart Avenue, Brookdale Close and two points along Corbets Tey Road. These footpaths link up with each other within the park.

Access is also possible from the Windmill Hall car park and via many places along Corbets Tey Road; the park is only gated to prevent vehicle access. It is open to pedestrian access 24/7.

A multi-use games area (MUGA) was constructed in the park in 2009. The MUGA is maintained to the same standards as the play equipment on the site. Inspections are carried out on a daily basis and the Parks Fitter undertakes regular full service checks and carries out any repairs that are required.

In 2007, an eight piece outdoor gym was installed at Upminster Park. It is located south of the play area, between the play area and MUGA.

The play area has seen many improvements over the last few years. The council carried out a revamp in 2006, changing the larger slide and group swings and adding a basket swing in 2015.

The Friends group have also funded equipment including an additional toddler multiplay item, additional cradle swings and springies. In 2017 some £11,000 of agility equipment and game boards was also added to the play area through Friends Group funding.

The Friends of Upminster Park received funding for and installed two table tennis tables in 2012. These area located next to the kiosk. Balls and bats are available to borrow from both the kiosk and the library next to the park. To stop additional wear around the tables, the Friends group opted to have imitation grass laid and the tables installed on this.

The population of Upminster increased considerably at the end of the First World War and it was decided by the Parish Council that a recreation ground was needed to provide for the leisure needs of the local residents.

In 1920, a scheme was developed by the Council for purchasing the Glebe, a large area of open ground behind the Church. The Glebe land was owned by the Church Commission and they were very keen to sell the land.

At a subsequent full Parish Council meeting a resolution was made “that the Parish Council recommend this meeting to authorise the Council to purchase the Glebe land – about 12.75 acres at a price not exceeding £3,750 for the purpose of a recreation ground."

In 1927, Upminster Sports and Social Club were negotiating with the Church Commissioners for the land and a purchase price had been fixed. Negotiations were taking place to divert the footpath across the Glebe. However, for some reason, the sale fell through and the Glebe land was again put on the market. This time, the Parish Council were determined not to lose the opportunity and they immediately entered into negotiation with the Commissioners.

On the 25th March 1929, a scheme was submitted to a full meeting of the Parish Council. The asking price was £6,000 and the terms of the proposed agreement was that £5,500 of the sum would be paid over a period of 50 years and the remainder over a period of 20 years. The repayments were estimated to be £320 per annum.

Once it had been acquired, the whole parish became very enthusiastic and the Ratepayers Association made an offer to beautify the new park. They agreed to plant a number of trees, level the meadow area and re-sow the grass where necessary. The public subscribed the generous total of £8.10.6d towards the cost of the trees etc, and they were planted at the gates and around the level meadow.

During the Second World War, Upminster Park was one of the few public spaces kept open for recreational purposes. However, as part of the air raid precautions, public underground air raid shelters were built on the North East side of the park.

There was also a British Restaurant (communal kitchens created in 1940 during the Second World War to help people who had been bombed out of their homes) built at the edge of the park.

In 1948, the underground air raid shelters were demolished and an ornamental garden built in their place. Also in the same year, two grass tennis courts were converted to hard surface and the main path from Corbets Tey Road to St Mary’s Lane was constructed.

In the 1960s, the park obtained is open frontage that makes it the park it is today, when the fence and hedge were removed from the Corbets Tey Road boundary. The path from Stewart Avenue to the Pavilion was also built.

In the 1980’s the play area moved from its old location near St Mary’s Lane to that of its present location next to the tennis courts.

Upminster Cricket Club, who’s first official match took place on Monday 30th August 1858, moved onto the site when it was still Glebe lands in the early 1920’s and they have remained ever since. Upminster Cricket Club and Upminster Hockey Club are the constituent parts of Upminster Pavilion Club. The pavilion club was formed in 1963/4 following the demolition of the former timber pavilion and the erection of the new brick built pavilion.

An extension was made to the pavilion by the club in the first half of the 2000s and later on they had two purpose built fenced cricket practice nets installed at the rear of the tennis courts.

The current friends group was formed in 2004 with help from the Parks and Open Spaces Service and have assisted greatly in renovations in the park. In 2006 extensive works were carried out in the park to improve the facilities, which included renovating and upgrading the tennis courts and children's play area. Planting also took place in the beds around the park with a variety of woody perennials being established.

In 2007, Upminster Park was awarded its first Green Flag, and alongside Bedfords Park was one of the first two parks in the borough to achieve this award.

In 2014, the park also received its first London in Bloom Silver Gilt award for the Park of the Year category.

The Friends once again contributed in 2017 when they a purchased a number of child’s trim trail equipment for the play area.

Large play area with equipment for a range of age groups. 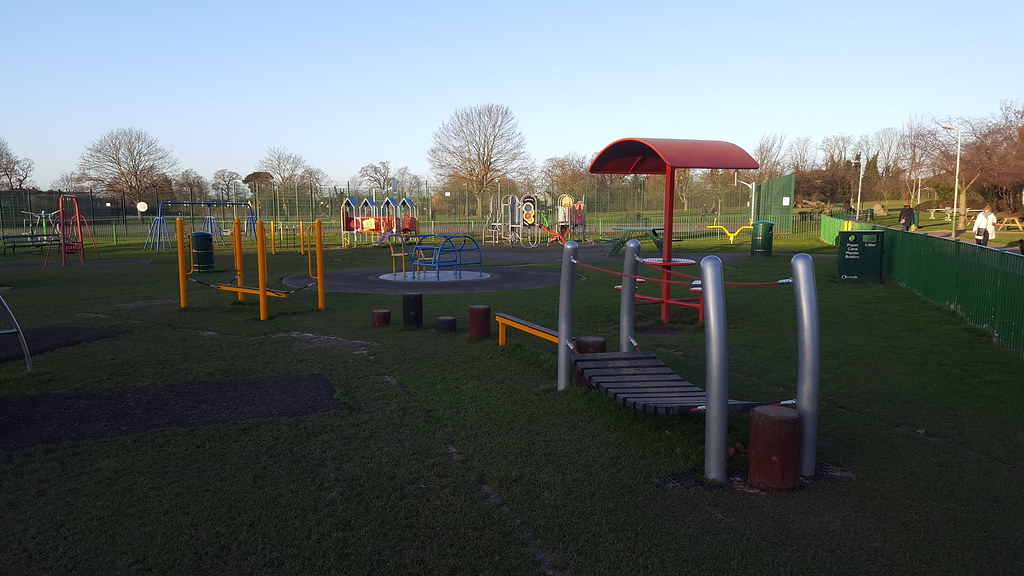