Clockhouse Gardens is a small 3 acre ornamental garden in the middle of Upminster, occupying the site of the former garden of New Place.

The manor house that once resided on the site was demolished in 1924 and the surviving Clockhouse is a grade 2 listed building.

A small lake exists on the site and is often visited by Canada Geese and Swans. Swaths of the site are planted with a variety of trees and some have been carved into figures, animals and seats.

The majority of the site is designated as a bowling green that was constructed in 1952/3 and at this time a public meeting was held by what was then the Hornchurch Urban District Council and a bowling club was formed.

Clockhouse Gardens occupy the site of the former gardens of New Place, a property which for much of its early history was an appendage of the Gaynes Estate.

In 1755 it was inherited by Sir James Esdaile, Lord Mayor of London in 1777-78, who renovated the house and laid out gardens. After the death of the last private resident is 1924 the house was demolished, but its 18th century stable block, The Clockhouse, remained, and was initially used by the local council.

Vegetables were grown in the grounds during the Second World war, after which they were opened as Clockhouse Gardens, with part of the moat remaining from the earlier landscape..

There is a small pay and display car park directly off of St Mary's Lane.

Clockhouse Gardens was built by Sir James Esdaile in 1775 on the site of an earlier 18th century house. New Place itself was first mentioned in 1475 and the name still survives in New Place Gardens, a road that runs adjacent to the remains of the former estate.

For much of its history, New Place was an appendage of the Gaynes Estate, with the lords of that manor often living here. By the mid 17th century, successful Londoners were buying country retreats in Upminster, and in 1700 New Place had been acquired by a draper.

Some 70 years later, Sir James Esdaile, Lord Mayor of London in 1777-1778, inherited the estate through his second wife. He amalgamated New Place and Gaynes and ‘undertook a programme of building, renovation and landscaping which transformed Upminster'.

In 1909, New Place comprised 70 acres and was bought by Sir Peter Griggs, who had played a large part in the development of Ilford and now turned his attention to Upminster. In 1924, upon the death of the last resident of the manor, New Place house was demolished.

The stable block within the grounds, The Clockhouse, remained giving rise to the new name for New Place. A red brick building of 1775, The Clockhouse has a small rectangular turret with a circular black clockface with gilt figures. The clock is signed ‘Edward Tutet, London 1774’ and is said to have come from the Woolwich Arsenal.

During the war, vegetable crops were cultivated on part of the site, mainly to provide for civic restaurants. During the two decades following the war, Clockhouse Gardens was created as a delightful public park, and was a popular centre for recreation, in its heyday having three full-time members of staff: two gardeners and a park attendant.

A bowling green was constructed in 1952/53, funded by compensation received from commandeered park railings during the war years.

The moat, with its now thickly overgrown central island, survives, fenced by low railings as the central feature of the eastern half of the park. With its various wildfowl, it is an ever-present attraction throughout the year.

In the 1960s, the waters of the moat were well stocked with fish, most of which were transferred from Langtons Gardens when its lake was cleaned out in 1953/54.

The park is surrounded by large trees, including two notable poplars, horse chestnuts, and encircled on three sides by an asphalted perimeter walk and some municipal-style beds close to the entrance.

At the south-west corner, the perimeter walk terminates in an alcove seat or arbour, situated as a vista between herbaceous borders. The bowling green in the western section of the gardens has a wooden clubhouse and is used by the Clockhouse Bowling Club.

The Clockhouse itself now survives as the tranquil setting of a sheltered accommodation complex. A recent addition in the gardens in a woodland setting by the lake is a sculptural feature of wooden figures, animals and seats providing a setting for children's play.

There are toilet facilities at the social club. 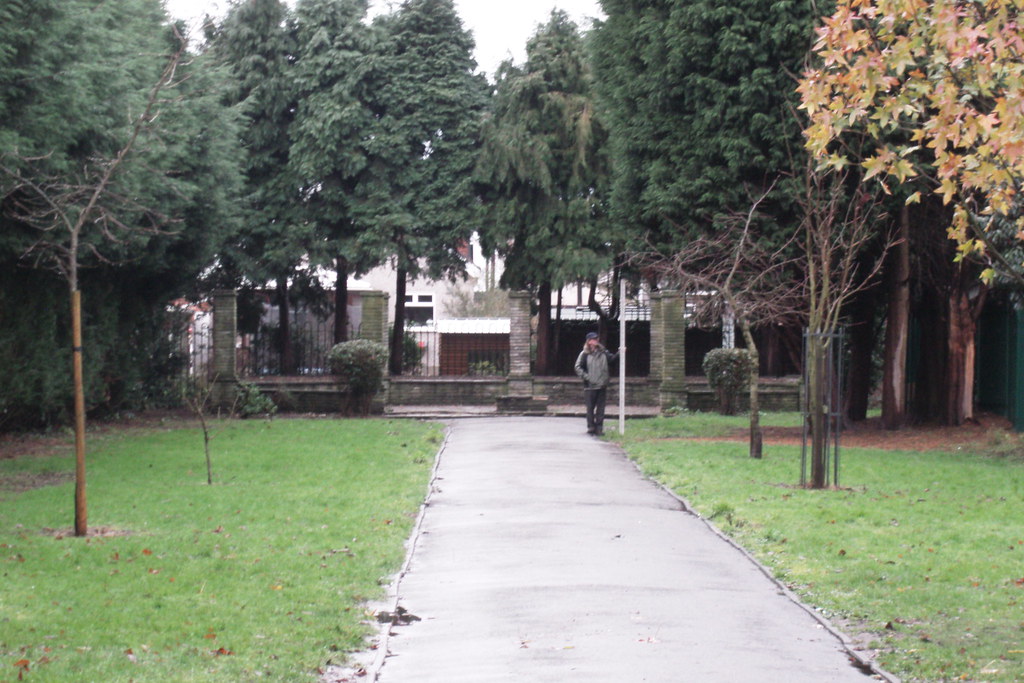