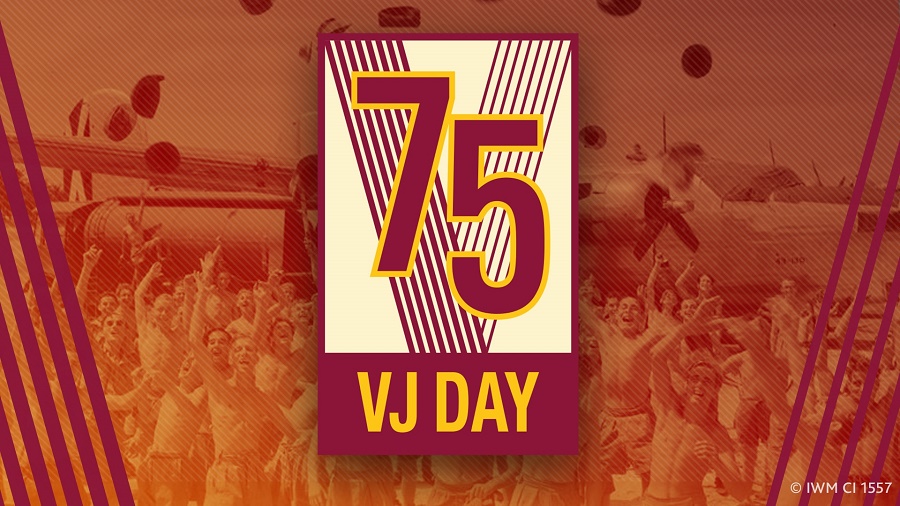 Whilst VE Day (Victory in Europe) marked the end of the war in Europe in May 1945, many thousands of Armed Forces personnel were still engaged in bitter fighting in the Far East.

The Prince of Wales, accompanied by Her Royal Highness The Duchess of Cornwall, led the UK in a national moment of remembrance and thanksgiving for all those who served in the Far East.

We commemorated VJ Day by sharing tributes throughout the day via our social media channels.

There were many ways you could get involved with helping us to commemorate VJ Day.

Why don’t you make your own bunting? Here are two templates to get you started.

Send us your messages of remembrance and thanks for the WW2 generation.

Submit a couple of sentences, and a photo if you have one, to remember a loved one who fought during the world wars – or just to give thanks for everyone who fought for their country to events@havering.gov.uk

We will publish them via our newsletter and social media over the VJ day weekend.

After observing the 2 minute silence at 11am, alternate bells were rung for 15 minutes to mark the occasion.

We asked you to send us messages of remembrance and thanks for the sacrifices made by all those who served in the Armed Forces, or supported them, during the Second World War.

You can read the stories here. 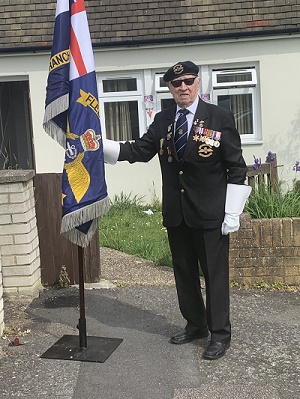 His Mum was from Southern Ireland and told him he had a Leprechaun on each shoulder – a good one on his right and bad on his left.

She told him always follow the one on the right for a good life, and he has.

He was too young to join the forces, and wanted to join the Dems Gunners, who were part of the Merchant Navy, so instead he joined the Home Guard Naval Cadets.

It was there that Harry successfully learned the skills that then transferred him to the 1st (City of London) Battalion, London Regiment (Royal Fusiliers), where he and his colleagues were stationed on Tower Bridge to defend the power room.

He received a commendation for this work.

At almost eighteen years old, Harry made a second attempt to join the Navy, in a prefabricated office in Romford.

He was accepted and sent to Blackpool for training, but rather than join the Carrier Illustrious aircraft carrier as planned, he was deployed to the RAF (still to wear his Navy uniform), to supply ammunition and supplies to France, Belgium and the Netherlands, for what was to become D Day.

In 1944 Harry was sent on tour in India to assist the Pacific Fleet.

He was based in Coimbatore, Southern India, which is where he first heard that the war in Europe had ended, and he and his colleagues celebrated with a small party. However, for them the war was not over.

The British troops, together with the Indian Army and the Gurkhas, fought on in difficult situations, and witnessing all of the atrocities of war, until it was announced over the loud speaker at their camp, that the Japanese had retreated and surrendered unconditionally in August 1945.

There was a celebration of fireworks, Harry remembers, off Colombo, which was then part of Ceylon, now Sri Lanka. However, Harry did not return to the UK until the end of September 1946.

His regiment stayed on to assist with the return of the Japanese Prisoners of War – most of them having to undergo medical treatment before being deemed fit enough to travel by sea or air.

It was not until three or four years after his return that Harry was awarded the Indian Medal.

Harry married on his return and had three girls and one boy. He worked for forty years in the print in Fleet Street.

He is now widowed and has twelve grandchildren, but I think we will excuse him for not remembering how many great grandchildren he has!

Harry has been a Standard Bearer for the Royal British Legion for thirty years and has attended the Buckingham Palace Garden Party, which was due to take place again this June, but was unfortunately, cancelled due to the Coronavirus.

Harry was also due to attend the Lord Mayor of London’s party, which was also cancelled.

Bunny Eagling shared this lovely photo of her father, Alexander Hedley (Jock) who served with R.E.M.E in North Africa.

Whilst fighting in Algeria he was injured and invalided back to Warley Barracks in 1944/45 where he met her mum soon after and he never returned to live in Scotland.

Dave Cleverley’s father was a Sergeant Major in the Royal Arterial Artillery; my family were bombed out twice during the war. 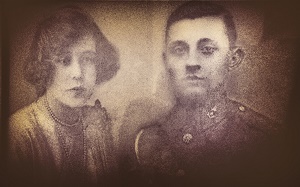 K Bryant’s father, Corporal James Berry was 20 years old when he went to Burma in 1944 and he had his 21st Birthday in the jungle.

His mates all took the bits of fruit off their biscuits from their meagre rations and gave them to him as a treat. 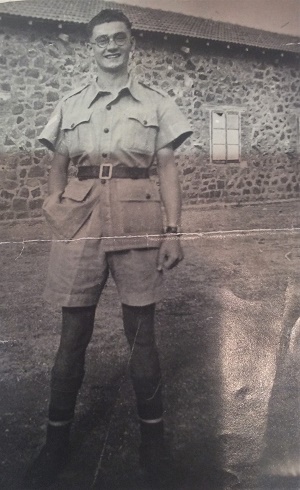 Here is Brian Eagling’s father George Eagling with a group of soldiers out in Burma.

George Eagling is top left and was in the Military Police.

Whilst fighting in Burma he suffered and nearly died of Malaria.

He left a young family at home and was gone for some years.

He also went to India. 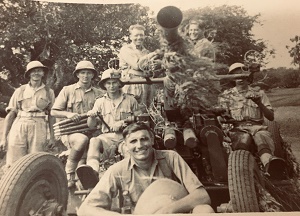 Mike Agombars father George Francis Agombar was captured following the fall of Singapore in February 1942 and spent the rest of the war suffering in Japanese Prisoner of War camps in Thailand and Japan.

They must never be forgotten. 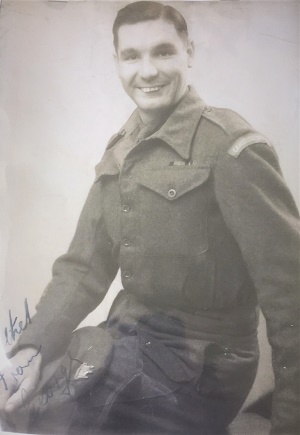 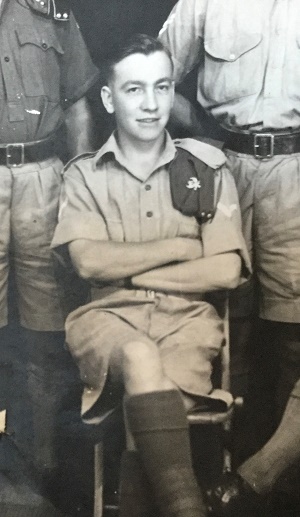 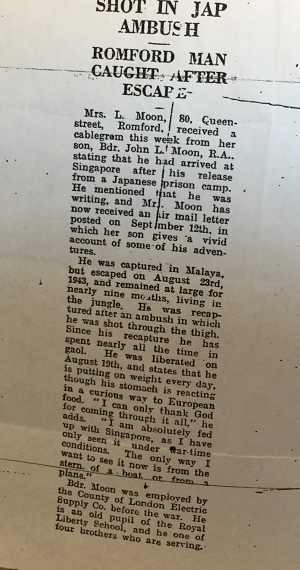 He survived the events at Kohima and the siege of Imphal and in later life was in the Burma Star Association.

He was still only 24 years old when repatriated in 1946 when all hostilities had finally subsided (some small groups of Japanese had not realised the war was over).

For his services to’E’ group an offshoot of MI9, the ‘E’ standing for escape and evasion, Colonel Clague gave him the Tanto Japanese sword seen being surrendered in the photo. 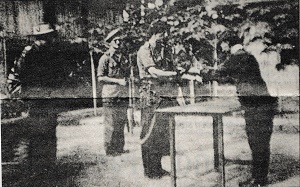 He was one of the Prisoners of War who was forced to build the bridge known as the Burma Railway and was held in Changi Prison.

We are proud of you, love your daughter Jill, granddaughter Hayley and all your family here in England and Australia. 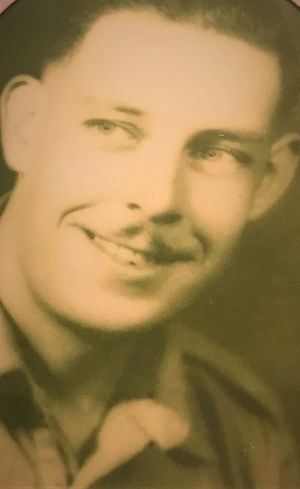 Donna Bowers grandfather L/Bdr Watson Tait 11bty RA, survived the atrocities that the Imperial Japanese Army bestowed upon him, from digging his own grave twice, being tied to barbed wire and feeling the blade against the back of his neck.

He never really spoke of what happened, just odd snippets every now and then he passed away in 1992.

The profile picture was one that my nan owned.

The group photo shows my grandad (circled) at one of the concentration camps.

This picture is published in the book " World War 2, Fighting for Freedom 1939-1945 (The story of the conflict that changed the world) By Peter Chrisp.

Below is a copy of the FEPOW (Far East Prisoners Of War) prayer written by Cpl Arther E Ogden and Victor Merrett (both FEPOW`s).

As we that are left grow old with the years
Remembering the heartaches, the pain and the tears
Hoping and praying that never again
Will man sink to such sorrow and shame
The price that was paid – we will always remember
Every day, every month – not just in November. 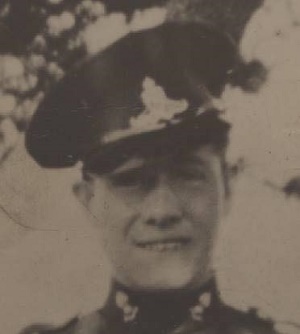 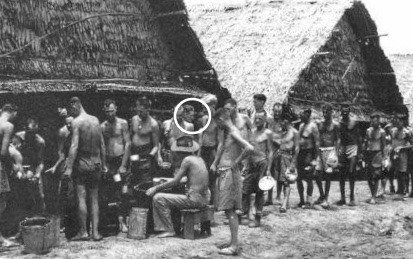 Embodied into Regular Army 1st September 1939. Posted to India/Burma 1 January 1941 and fought in the field until he returned home.

Our family lived in Holborn at the time so he was never a Havering resident although I have been for 50 years. 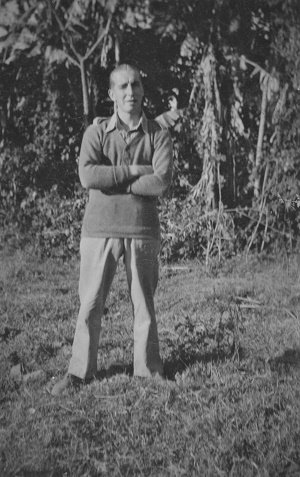 They met at Salisbury Plane barracks.

Dad was a Sergeant in the Royal Horse Artillery. My mum was a cook in the ATS.

They spent the majority of their married life in Hornchurch.

I can just imagine how we would have celebrated with them had they been with us. 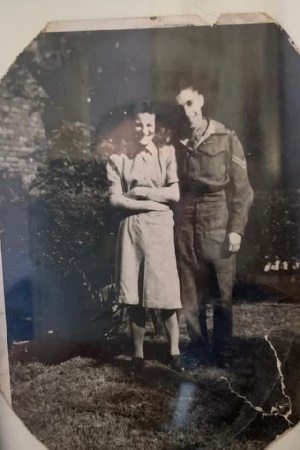 Sydney Peter’s father, Sydney Ambrose Peters who was based primarily at Chatham in Kent.

Before the war he was a Merchant Navy seaman whose ship was commandeered by the Royal Navy and converted to an Armed Merchant Cruiser it was sunk in a battle with a German battleship in November 1940.

The sailor sitting on the left is my dad who never returned.

The sailor in the second photo is my brother who survived three torpedo attacks and lived to tell the tale. 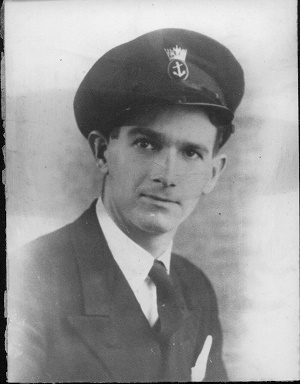 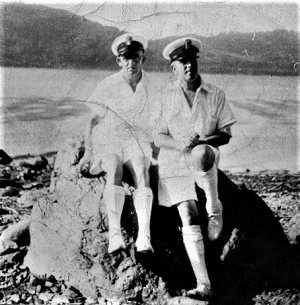 Keith and June Greenhalf would like to remember their fathers who fought during World War 2.

Keiths father, Thomas Frank Greenhalf was a sailor on board HMS Ajax during the Battle of the River Plate, a battle in which his ship helped sink the German battleship Graf Spee.

Also remembering my wife's father Edward Ernest Perkins who was serving in Africa during the war and his vital role was to maintain Spitfire aircraft.

All the streets in Ajax, Canada are named after crew members who were on board HMS Ajax during the famous battle of the River Plate in 1939.

Greenhalf Drive was named after my father.

Without brave people like this, today we wouldn't have our freedom. 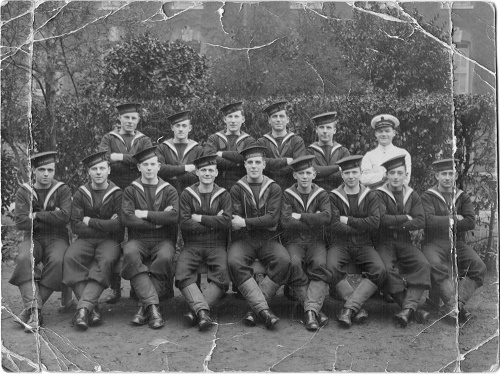 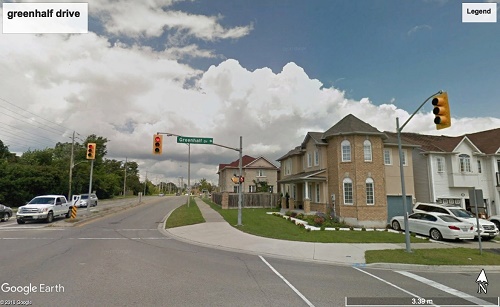