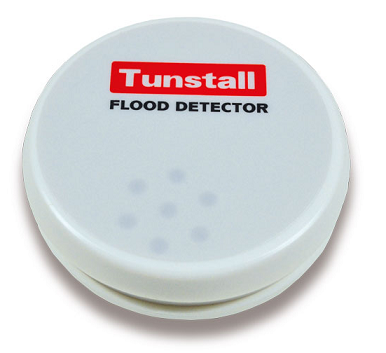 What is a flood detector?

The flood detector is a neat, unobtrusive radio sensor that provides an early warning of potential flood situations.

The unit can be placed on the floor under a sink or in a bathroom, next to the toilet or near the bath.

How does it work?

The flood detector has three sensors. When two of the sensors make contact with water it provides two types of alarm - the first is a local audible alarm and the second sends a signal to a Lifeline home unit or other Tunstall telecare enabled systems.

The Lifeline home unit automatically raises a call to the monitoring centre where the operator can identify what type of detector has initiated the call, allowing the most appropriate and immediate action to be taken.

Who is it for?

The flood detector provides added reassurance to any homeowner or resident, giving extra protection to individuals who are likely to be at risk from leaving taps turned on.

Why is it needed?

A blocked sink, toilet, or taps being left on unattended could quickly lead to a flood causing damage to carpets, decorations and electrical equipment with potentially dangerous consequences.

The after effects of a flood could not only result in extensive repair costs and increased insurance premium but also long term damage to health, particularly in winter.