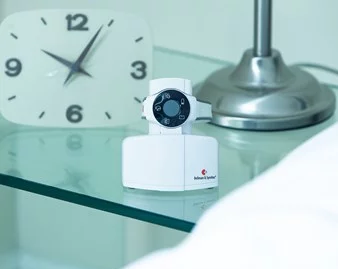 What are sensory impairment solutions?

Sensory impairment solutions are devices that can be added to telecare systems to support both visually and hearing impaired users to live safely at home.

They include devices such as vibrating pagers, sounder and flash beacons to ensure the user or carer is alerted when an alarm call is raised via the Lifeline home unit or other Tunstall telecare enabled system.

This helps to provide added reassurance and protection to the user both during the day and night.

Why are sensory impairment solutions needed?

According to the Royal National Institute for the Blind, there are around 2 million people in the UK with a sight problem. Among these 2 million people, over 370,000 are registered as blind or partially sighted.

It is also estimated that an additional 20% could be eligible for registration but have not yet done so.

45% of blind or partially sighted adults live alone. Age-related eye conditions are the most common cause of sight loss in the UK.

95% of people with sight problems in the UK are 65 or over. There are also nearly 9 million deaf and hard of hearing people with 2 million people using hearing aids.

Due to their impairment it is critical that people living with such a condition, in particular those living alone, are alerted quickly when an alarm is generated within their home.

The DDA Pager solution alerts the user to different events that occur in their home ranging from daily events such as incoming telephone calls and visitors at their door to potentially dangerous situations such as smoke detector activations.

When a telecare sensor is activated, the Lifeline sends a signal to the pager, via a transmitter, which alerts the wearer by vibrating and lighting coloured LEDs.

Unlike a number of similar systems, this pager solution doesn’t require a radio licence.

Compatible with the Lifeline Connect+, the MyLife adapter makes it possible for the individual event e.g. smoke detector that has generated the alarm to be recognised by the user enabling them to respond quickly and appropriately to the situation.

The different events can be identified by the user by the pattern of vibration used and the colour of the LED that has been activated.

The Standard Pager is ideal for situations that require a longer range (up to 200m) from the transmitting device (e.g. larger homes) and also where the time between battery charges (up to 1 week) needs to be greater.

Worn on a belt or clipped to clothing, the pager vibrates and lights coloured LEDs when a telecare event if generated.

The Wrist Pager is a small, discreet paging device that is designed to be worn like a watch. It increases the comfort of wearing the device encouraging the user to wear the device at all times when they are in or around their home.

Like the standard pager, the wrist pager vibrates and lights coloured LEDs when a telecare event is generated.

Each pager is supplied with a charging cradle to recharge the pager battery at night.

The cradles are also designed to be connected to a pillow alert pad. When the pagers are placed in their chargers any incoming alerts automatically vibrate the pad that is placed under the user’s pillow to alert them to telecare events during the night.

The Flashing Beacon can be added to the overall solution to provide visually impaired users with an additional clear and distinct warning.

The beacon flashes brightly when any telecare event is generated and also lights one of its LEDs to help the user identify the event that has generated the alarm.