Havering has been honouring its many local heroes at the Mayor’s Civic Awards in recognition of their contribution to the community.

The eclectic line-up of residents was recognised by former Mayor Councillor Michael Deon Burton who served as Mayor between 2019-2020, after the awards were set back a year due to the pandemic.

Among the 25 recipients were:

“It’s a great honour to host the Mayor’s Civic Awards to recognise the many people in our community who have gone above and beyond what they needed to because they care about others. They have stood the test of time and remained committed and supportive during the pandemic.

“My heartfelt thanks and congratulations go out to each and every person.”

Each person received a pin and certificate to acknowledge their achievement. 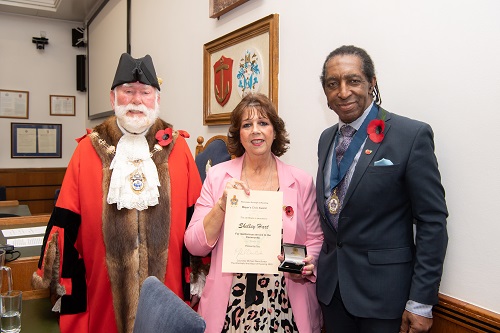 “It is an absolute honour. We don’t take it for granted that we will be recognised so to be recognised in this way means a great deal and is a testament to us really.

Shelley, who set up the service from scratch, said:

The centre has responded to emergencies in London such as the 7/7 bombings, Grenfell fire in the past.

Shelley added:“Prior to the pandemic, we had put a disaster recovery plan in place, so we were already one foot in front of everyone and were able to respond quickly when people were out of food and families were dispersed. We were able to adapt our service overnight to crisis support.”

Shelley said that during the pandemic they encountered many lonely people and were able to help 2,900 households, deliver 4,700 prescriptions, checked on and chatted to 350 people and walked 45 dogs.

More recently, the service helped to support the newly-arrived Afghan families. Their appeal resulted in more 1,000 boxes of donations.

Shelley added that some firm friendships have been formed through volunteering. 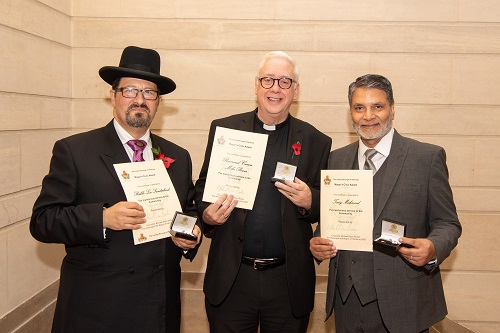 Tariq Mahmood was one of three member of the Havering Interfaith Forum to receive the Mayor’s Civic Award.

“It has increased my confidence to continue to do what I am doing. It makes me know I am going in the right direction.”

Mr Mahmood has been part of the forum for the past 20 years and facilitates discussions between the different religious groups that make up the forum.

Along with members Rabbi Lee Sunderland and Rev Canon Mike Power, he was presented with the mayors pin medal and a certificate which he says he will proudly display at the pharmacy where he has worked for the past 35 years.

He said the group have regular discussions to help them understand each other better.

These discussions have focused on issues such as why certain foods are forbidden, why particular clothing is worn and marriage rituals.